See, this is the sort of strip that people try to confront me with when I refuse to acknowledge that soap opera comics maybe might be a little bit boring. And yet how can you deny the tension that crackles out of these panels? Thrill as Mary and Toby half-heartedly argue over who will pick up the check! Shudder in anticipation as you try to imagine just what kind of paperwork awaits Mary back at her empty, lonely apartment! Gaze in wonder at a restaurant bill that contains only line items for “salad,” “stew,” and “dessert,” perhaps indicating that our ladies have lunched at the restaurant owned by Herb and Jamaal! It’s more exciting than taking a roller-coaster ride through a hail of gunfire while tweaking on crystal meth!

It’s been repeatedly established that Elmer’s Spanish is no better than that of any other American-raised native English speaker who paid little or no attention in his high school Spanish class, so Kings manager Fran Riordan’s “let’s put all the brown guys in one hotel room” is mildly troubling. More troubling, though, is the gang sign he’s flashing in panel one, which may indicate that this so-called “minor-league baseball team” is really a violent organization dedicated to the sale of illegal narcotics. “WEST SIDE, BOYEEE!”

Taken in isolation, the second panel looks like Rex asking if a concerned citizen’s cellar could be used as a makeshift quarantine ward where the MRSA-infected youth could be locked up until the crisis is solved, possibly by their deaths. But since this is Rex Morgan, M.D., we know from the larger context that he actually just likes having a lot of teenage boys available in one easy-to-find location. 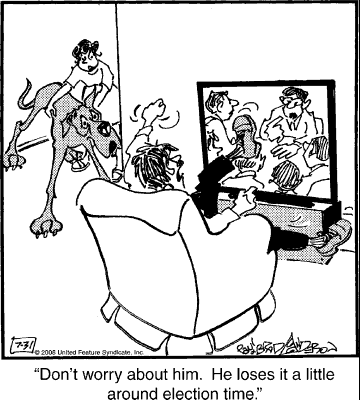 Today’s Marmaduke is funnier — by which I mean that it’s actually kind of funny — if you read it in light of the theory that Marmaduke’s owner is actually Hitler on the lam. “Argh, electoral democracy is a degenerate failure! When will these dummkopfs learn that the Volk’s will is best expressed through a single party headed by a single, unquestioned leader?” This scenario still doesn’t explain why he’s only sitting three feet away from his television, though.