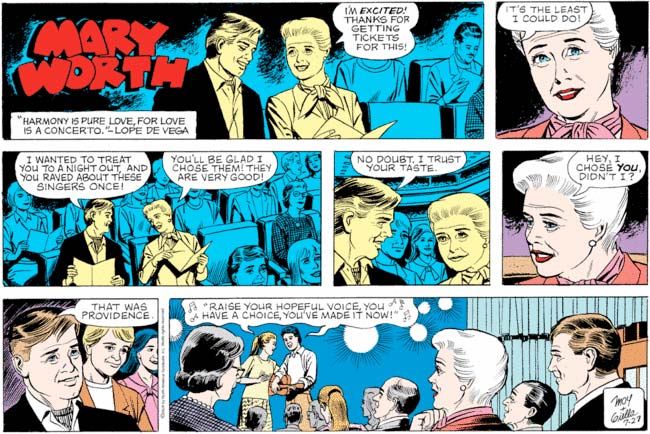 Fans of Mary Worth and/or fans of music made after 1968, prepare to have your mind blown! After speculating that Mary wanted Jeff to take her to see indie folk-pop duo the Weepies, today faithful reader Wanders in his Mary Worth and Me blog points out that she and Jeff are actually seeing Glen Hansard and Marketa Irglova. This unlikely Irish-Czech duo were the stars of last year’s indie darling film Once, and won an Oscar for (I’m pretty sure) the song that Mary and Jeff are listening to in the final panel of today’s installment. Of course, as Glenn and Marketa actually look like this, based on the pic I’m guessing that they’re actually seeing a Glen Hansard and Marketa Irglova tribute band.

The appropriate answer to Jeremy’s request — “Sure, just wait 45 minutes until we’re done fucking” — will ensure that he won’t ever ask them to pick up his bandmates again, or indeed ask them for anything else, as he’ll no doubt run gibbering into the night, never to return. 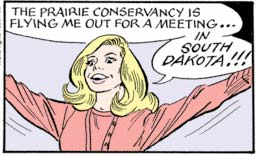 As usual, Sunday’s Apartment 3-G merely repeats installments from the previous week, but the final panel seems to have been drawn as some kind of challenge. It’s basically saying, “Oh, you thought Lu Ann was a little too excited about going to South Dakota yesterday? Well, check this insanity out.” In yesterday’s installment it just looked like she had mistaken South Dakota for someplace exciting; today she appears to be in the grip of hilariously misplaced delusions of grandeur. “Did you hear me? I said South Dakota! SOUTH DAKOTA! MU HA HA HA!”