Oh, there’s always something to go with your COTW post, now isn’t there? This week, we have a fabulous report from another Comics Curmudgeon get-together, this one featuring a visitor all the way from JAPAN! Crazy! I’ll let faithful reader willethompson tell the tale…

John Shelton Reed said “Every time I look at Atlanta I see what a quarter million Confederate soldiers died to prevent.” He said that BEFORE I-85 went to 12 lanes (permanently under repair) all the way to Lawrenceville. But I braved it all to see True Fable, Squid Countess, Trotzenbonnie, and ChattyGenes and her puppets. 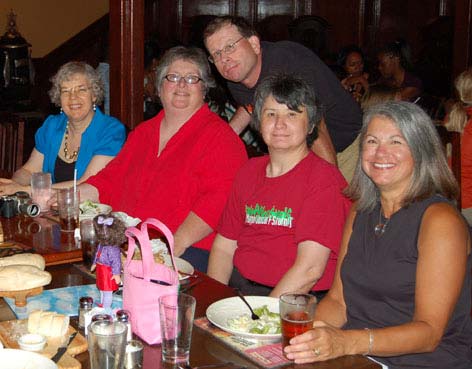 The Old Spaghetti Factory is located on Ponce de Leon, a street that was the center of a down-at-the-heels (aka Southern Bohemian) neighborhood that is being gentrified as the Bank of America tower glowers down on it. OSF is one of those places that manufactures atmosphere, or at least buys it by the truckload. Brass and tulip-shaped light fixtures fight with a faux streetcar for your visual attention in large, noisy rooms.

I wandered in about 12:30 and met TF and his boys (two INCREDIBLY nice young men) helping CG set up the puppet show in a corner of a downstairs room. Knowing that TF couldn’t drink, I was perhaps cruel in fetching a locally-brewed Sweetwater 420 but it was not without incident. An unattended bar? In ATLANTA? On a Saturday afternoon?? If he knew who I had to fuck to get that beer, I think he’d forgive me.

Trotz arrived next, with her sheepdog Miss Mollie (looking stunning in a pink ribbon) and Mr. T (looking stunning in a green T-shirt) who excused themselves to sample the pleasures of Piedmont Park. Squiddy was delayed by construction on I-75 (see: John Shelton Reed above), so we ate as ChattyGenes looked on, not wanting a load of pasta to interfere with her performance energy.

And yes, she fought the background noise of a teenage girl’s birthday party to deliver a sublime 50-minute puppet show with five featured characters (and two backup sheep) tailored to a very select audience (Hey, gh! She had you! And Big Sims, too!). AND she brought presents for all!! AND AND even some of the birthday party attendees came over to watch!!! Take a hike, Cyndi Lauper, we gotcher performance art right HERE! 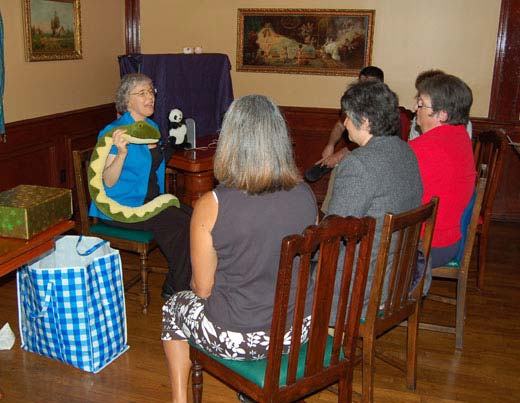 All in all, a fine time was had by all in placing faces with screen names. As TF said, it was like CC but in real time. The only downside was a waitstaff that couldn’t seem to remember that TF’s boys had ordered Cokes. In Atlanta? Gotalmightdamn, they squeeze the stuff fresh daily just down the street!! What, they had transported it all to Beijing to fight the air pollution???

There are few things that tickle me more than knowing that the humble Website I churn out in my pajamas at odd ours of night has brought people together in real life who otherwise would never have met! Don’t forget that you can arrange your very own meetup on the Comics Curmudgeon Forums!

Also of note from my in-box this week was this find from faithful reader Matt K. in Brooklyn, who has solved a mystery that has been bedeviling the DeGroot parents: where their boarder gets his money. “I saw this ad while flipping through the latest Timeout NY and immediately thought of TJ. Classy job.” 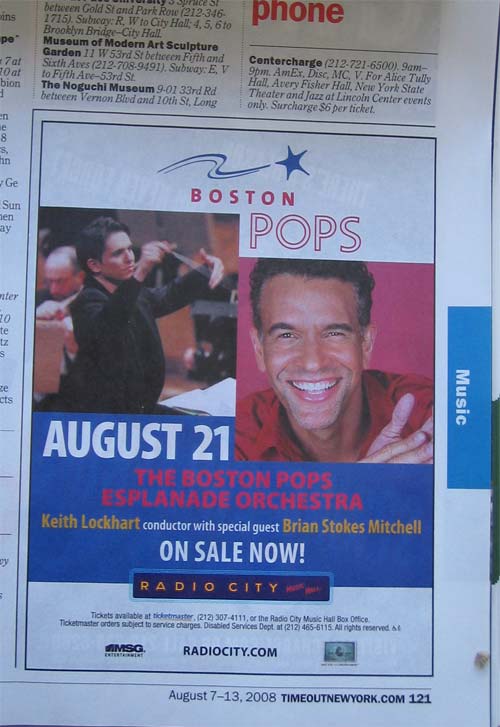 And finally, for everyone who was despairing that Captain Thunder’s brilliant Dennis the Menace-based Regency pastiche had run out of steam — fear not! The Luck of Dennis St. Michel, Viscount Stokington is back, and better than ever!

And with that out of the way, it’s finally — finally! — time for your comment of the week.

“What does John think a ‘simple wedding’ means? Boxers and a trucker hat? Sorry but YOU STILL HAVE TO WEAR CLOTHES.” –psychobiddy

And your tasty runners up!

“It’s interesting how the folks in Gasoline Alley use two different meanings for the word ‘parts’ in succeeding sentences. That’s what happens when your entire strip only has a hundred-word vocabulary.” –BigTed

“Now at Six Flags: The Mary Worth Roller Coaster! They strap you in and the cars just sit there for all eternity.” –Calico says

“We all know that Toni’s getting it, but clearly not from Brad. I’m surprised Brad doesn’t wear his black concert t-shirt from the ‘Monsters of Abstinence’ tour.” –trey le parc

“A Southern teacher should, however, definitely know better than to wear blackface into the classroom. Her attempts to appear old enough to remember when minstrel shows were not considered offensive will not save her from community ire — unless, of course, the community is made up entirely of pubescent boys. In that case she can basically wear a Klan hood, as long as the costume doesn’t extend below her neck.” –Bad at Net Handles

“Judging by the beady-eyed look of horror from the concessions worker, I think the ‘gold’ in question is a reference to the several inches of liquid butter at the bottom of the bucket, which this plugger bear is shown pawing at, reminiscent of Winnie the Pooh gorging himself on a pot of honey. The difference of course being that Pooh died from complications due to his type II diabetes. Plugger bear here, though he likely suffers from hypoglycemia if not full-blown diabetes, is probably going to go out from a massive coronary during the movie.” –Colinski

“I think we all know how Marmaduke described himself.” –Gold-Digging Nanny

“So is Mary Worth always like this: picking an interesting issue, building up to it by way of weeks of intense boredom, and then ending without any kind of interesting climax whatsoever? It’s like digging for treasure and finding only my own grave.” –Amanda

“I guess since pain and human suffering are timeless it doesn’t really matter when FW occurs.” –CortJstr, on the chronological implications of Funky Winkerbeans timejump

“I see Michael married a gal just like the gal that married dear old dad: an impatient rageaholic.” –Hank

“While I appreciate The Vulture taking the trouble to explain to me exactly what’s going on, that does tend to take the edge off the dramatic sense of fear.” –Poteet

“Dear God, what life must Toeby have had before meeting Ian that the purchase of a documentary would cause such excitement? I’m almost afraid of the day she gets a library card.” –Dingo

“The craziest thing about this Mark Trail is how plausible it is. I totally believe that Mark would give this long dissertation about fleas aloud in a stentorian voice when his only ‘audience’ consists of his dog and some terrified squirrels.” –Joe Blevins

Those of you who put cash in the tip jar are to be thanked and praised! As are our advertisers: