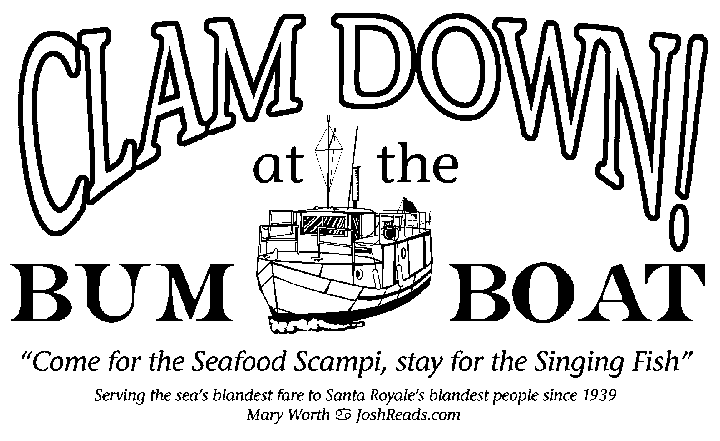 A number of sizes and styles are available! And of course if you want this logo on something else, just let me know, and I’ll try to accommodate you. Let your platonic not-boyfriend or -girlfriend know where you want to be taken out for shrimp scampi!

Of course, myriad other merchandise items are waiting for you! In fact, four are on display in this picture from faithful reader Dr. Strenglove! 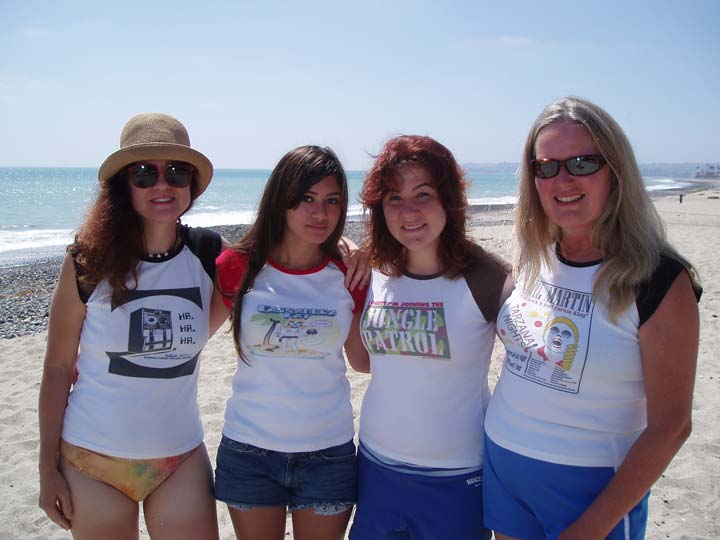 See the attached photo of me and family members of various ages (two of us are under 19 and two are over 40) wearing Comics Curmudgeon Gear on Capistrano Beach, Orange County, California, from our vacation first week of August 2008. I’m the one in the hat.

From left to right, those are t-shirts honoring the AJGLU 3000, Cassandra Cat, the Jungle Patrol, and Gail Martin. Huzzah for the whole Strenglove clan!

OK, now that that shameless pimpery is out of the way, I present you with your COMMENT OF THE WEEK:

“Your question brings to mind a question I had the first time this came up: why would a used car dealer have a fleet of limos? But then I figured I’d have a drink and forget about it. That was nice.” –Bunnë, Official Comic Execrator

“I just wanted to let you know — Jimmy’s heard from Shain Tech and Lawson University. I’m so excited! In fact, I’ve masturbated to the point where my hand is glued to the brochures!” –survivor

“Whatever else you might say about Toby, she knows exactly what kind of lame-ass present her lame-ass husband will appreciate most. I’m even inclined to give her the benefit of the doubt on the ‘it wasn’t easy’ comment, despite the fact that she only visited one store and then bought it online; the hard part wasn’t really finding the DVD, but rather the strain of pulling all the tattered shreds of her ruined, desolate soul so that she could just barely care enough about Ian to buy him a gift in the first place. Seriously, that’s going above and beyond the call of duty in Mary Worth, where serving someone a plate of lurid yellow globs masquerading as ‘shrimp scampi’ is considered to be a satisfactory replacement for angry make-up sex.” –Trilobite

“So Mark Trail has devolved into a ‘man rescues girls’ story. I can’t express how surprised I’m not by this development.” –A New Day

“David Cronenberg, Canadian film maker, will retell the romance of Liz and Anthony in his next film. Once again, he will tackle the question: ‘What is real?’ The same marriage date, used again … and again and again? The groom’s parents — unknown to the bride’s family, despite their long interest in the ‘wholesome’ young man? Or drunken child-abandoners? The mysterious dark lady — the first wife? Or shrunken into a dark child, locked in her basement cell? Cranes transmogrifying into crows. Swirling colors/colours not found in nature. All the characters moving jerkily about, their actions controlled by a Mysterious Puppeteer — who threatens to end this reality and start it all over again, with ‘changes.’ Cronenberg’s fearlessness in presenting gut-wrenching grossness will be tested in The Wedding Banquet scene.” –Someone from Texas….

“Well, you learn something every day. I had no idea that ‘regatta’ is the street name for ‘laudanum.'” –Nekrotzar

“Man. That whole neighborhood is dysfunctional. Liz never stood a chance. All she had left, in one final act of defiance to her fate, was to choose hideous colors so everyone would look as awful on the outside as they were on the inside.” –Farley’s Revenge

“I’ve got to hand it to Anthony’s mustache for not having anything to do with shitfest.” –PeteMoss

“What’s this? A Gord/Anthony superstar team up with no other characters in sight? That’s dangerously pushing the envelope of doughy, pale, white guy blandness even for this strip.” –Joe Blevins

“Thank heaven Peter has the ability to plummet to earth with the proportionate terminal velocity of a really big spider, thus beating gravity at its own game. He’s zooming through space like he thinks there’s a TV set down there.” –Muffaroo for hire

“At first I thought it was Iris giving the little hooligans candy as well. Then I figured out it was Mira. They apparently go to the same godawful hair stylist — or the aforementioned FOOBification of all reality has progressed. Everyone is devolving into Elly, I tell you. I can feel my nose widening as I type.” –Brick Bradford

“In other news, handguns have just been legalized in Washington, DC, so hopefully someone will pop a cap in Billy’s ass before the end of this storyline.” –Matt E

“Pluggers don’t go to the beach, because after they’ve been wet they smell terrible. Well, more terrible.” –Mac

“Judge Parker: Sure enough, thanks to this strip, my original indifference to golf has turned into dislike, then hatred, then loathing, and now white-hot seething hostility.” –Poteet

“Like most people who want to unwind in front of the boob tube after a long day, I eat an entire plate of individually wrapped Land-O-Lake margarine packets.” –Jesse Cline

“So Dagwood is an incontinent time-waster; Crankshaft’s only source of fulfillment is spreading misery to those around him; Marmaduke is a slobbering, insupportable burden to the Hitler family; and Momma is obnoxious, shriveled, and dying. It’s like a typical day in the comics, only more so. I can only assume that somewhere Marvin is taking malicious satisfaction in shitting himself, Spider-Man is singing along to the Empire Today commercial, and a shabbily-dressed plugger is finding a way to cheap out on taking a nap in his own filth while eating a bacon-wrapped ice-cream sandwich.” –Violet

“Poor Grandpa Jim. He’s trying so hard to leave this world before the unholy cataclysm of puns and mustachioed babies that the Anthony-Liz wedding will undoubtedly bring.” –Dagger

“Toby and Ian are so boring that watching a PBS documentary raises the excitement level in their lives. Even Toby’s Walter Mitty-esque inner monologues consist of nothing more than looking forward paying her credit card bill. Say what you want about Mary Worth, but at least her meddling leaves a trail of death and destruction in its wake.” –monkey.dave

“It’s like the old joke: where does a 500 pound gorilla sit? Just replace ‘sit’ with ‘squat and run a meth lab.'” –Master Mahan

“That Family Circus looks less like ‘Our Olympics’ and more like ‘The myriad excuses the Keane kids make to the school nurse to cover up the horror of child abuse.'” –Patrick

Plus, if you’re at all interested in dramatic theory and how it pertains to Mary Worth, you really must read this amazing comment from Journeyman Softheart, which would have been on this list had it not been longer than most of my own posts. It still gets a very honorable mention.

Also to be mentioned honorably are everyone who put a little change in my tip jar! And honor accrues to our advertisers as well: