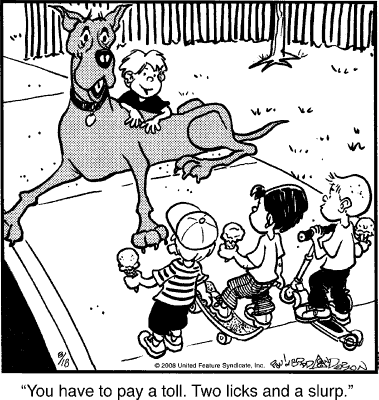 Eagle-eyed readers have noted for the past few days that there have been two names at the bottom of Marmaduke’s panels — Paul and Brad Anderson, presumably indicating yet another cartoon property being passed down from father to son, like kingships and duchies were in Europe in days of yore. Today may be Paul’s first day really driving the pen, as there’s a distinct difference in style — the children look like recognizable humans instead of face-melted horror-things, for instance. But thankfully, the feature’s central Marmadukeness remains intact, as Marmaduke is cheerfully threatening to eat these little suburban moppets, or worse.

Cherry and Kelly are dumb girls, so obviously they’re not going to be able to get out of their Desperate Cat Cave Dilemma themselves. The question is, which male person or persons will end up saving them? Will it be, um, what’s-his-name and the other guy, the two losers who have been on their pointless expedition with them? Or will it be Mark, who is looking so handsome sitting on top of that pretty, pretty pony with the pretty mane? As with most questions involving Mark Trail, you’ll quickly figure it out if you ask yourself “How would a ten-year-old girl answer?”

I admit somewhat shamefacedly that I unironically laughed at today’s Crankshaft, and actually sort of look forward to the long-simmering battle of extremely awfulness that will crankily rage between these two until one of them dies. I do wonder why Crankshaft’s daughter’s mother-in-law (I refuse to look up her name) is decked out in black. Is she perpetually in mourning for her long-dead spouse, like Queen Victoria? Or is she just an inky singularity of hate, from which no light or joy can escape?