Thank goodness that the huge Satan-worshipping fire orgy that rings in Milford’s football season has now become an annual event. God only knows what exactly is burning in the background of panel one — probably the high school, or perhaps the entire neighborhood surrounding it — but I kind of love Gil standing on his makeshift platform exhorting his crazed minions to ever-higher levels of ecstatic bloodlust. You’ll note that at least one devotee of the flame is flashing some devil horns at the end of her jelly-braceleted arm, indicating her devotion to the archdemon Astaroth. The fact that Cully has been given temporal dominion over the football team is a sure sign of the carnage that will conclude the evening, as he fallaway slams the unwitting victims directly into the inferno, ensuring that the Dark Lord will smile on the Mudlarks this fall.

After much promise, the just concluded Kelly-versus-Cherry storyline rapidly declined into a total snoozefest, but I’m still holding out high hopes that we’ll get some action out of this modern day St. Francis, his adorable daughter, and their sinister raccoon familiar. So far our gentle baldy has cunningly used the passive voice to explain the plight of the thirsty, thirsty animals, noting only that the water is being “drained away.” Eventually, though, the little tyke will want to know who is doing the draining, and he’ll have to admit that it’s the humans, with their endless appetite for well-watered suburban lawns and Bed, Bath, and Beyond-bearing strip malls. Presumably the two of them will then silently watch the dehydrated beasts in panel two stumble around in the vicinity of their cabin for a bit; next, the raccoon will chitter menacingly, they’ll nod their heads in agreement, and the killing spree will begin.

Lu Ann is capable of such charming depths of self-deception that I was hoping she’d take her initial thought balloon to its logical conclusion. “Beer cans, wine bottles, and pizza boxes! It looks like a scene from a frat house movie. That’s it! Alan is allowing a major studio to use his apartment as a set for a frat house movie! It all makes sense now!” It would also explain the terrible state of the curtains; as any good set dresser knows, the stereotypical denizen of a frat house in a frat house movie is such a seething cauldron of homophobia that he would literally have a stroke if he attempted to contemplate window treatments. 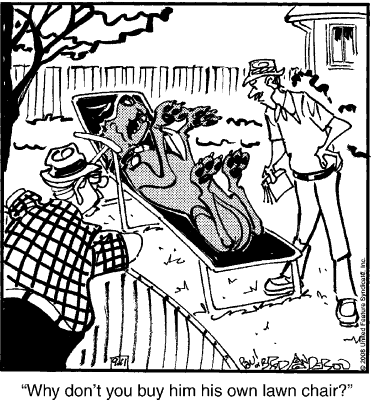 I originally read this caption as “Why don’t you bury him in his own lawn chair?” Which you have to admit makes sense, as Marmaduke appears to be dead.