Hey, everybody! I want to begin this post by paying collective homage to everyone who was kind enough to put some money in my tip jar while I was away, and for Uncle Lumpy and his cast of dozens of rotating banners for urging you to do so. Everyone who contributed will be getting a personal thank-you from me sometime in the next week, but I do want to collectively say thanks now before you all. I also want to thank Uncle Lumpy for just plain being an awesome pinch-hitter, and for making me laugh on multiple occasions when I checked in from my Undisclosed Location.

Anyway, before I get to the CsOTW, I need to approach one strip that I didn’t discuss today, but which held a very special resonance for me.

Soooo … remember a ways back when I mentioned that I had been nominated for the Hot Blogger Calendar? Well, thanks the gratuitous ballot-stuffing on your parts that followed, part of my week off involved a bus trip to New York to get my picture taken. I shall say no more now, except to note that I was a lot more into the experience than poor Brad. More information as I get it, but: brace yourselves.

And you know who else was an official Hot Blogger? None other than Sally Forth scribe/Medium Large creator/all-explaining blogger Francesco Marciuliano! 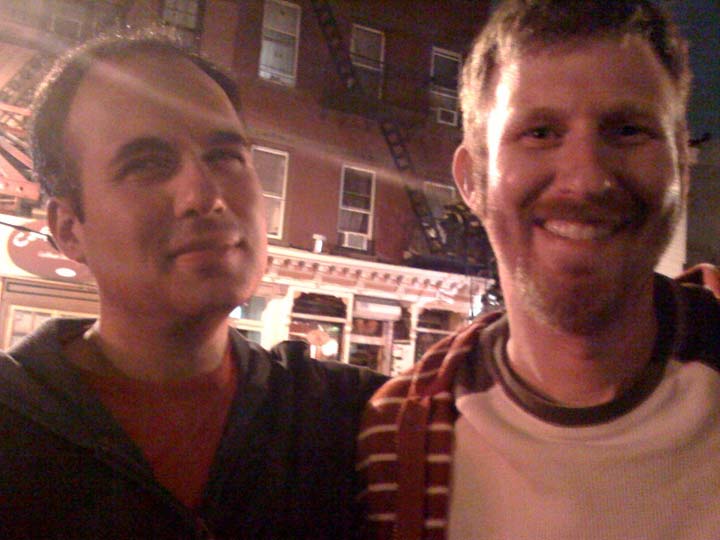 This pic of the two of us was taken the night before the photo shoot. You can barely tell, but those are firemen on the fire escape on the building behind us, peeling big chunks of vinyl siding off of the building that my head is mostly blocking, because it was on fire … as a result of our hotness? Probably!

Anyway, take a moment to calm down and enjoy the comment of the week!

“The Funky-doesn’t-lose-weight plot is one of the most boring things I’ve ever witnessed, and I read Spider-Man.” –Tweeks_Coffee

And the runners up!

“Only a plugger would spend three and a half hours repairing a $9 toaster? I’m no economist, but if he managed to scrape $9 worth of Pop Tart icing from the inside it was probably worth it.” –gh

“Wait a minute! Alan used to be alive?” –Muffaroo-who-brunches

“My name is Margo Magee. You called me ‘li’l lady.’ Prepare to die.” –blueberrygrrrl

“When it came time to break the heartbreaking news to my wife, I tried this: Me – ‘There were some fraudulent charges on one of our credit cards. The bank wiped the charges and will issue us a new card.’ My wife – ‘OK.’ Hopefully this tip will help Toby with her terrible ordeal.” –Worthinator

“Maria! Jameson! For the love of God, DON’T REPRODUCE!!” –Mibbitmaker

“I’m on tenterhooks with Mark Trail. Hopefully the titular hero will show up, punch out blondie, and rescue the poor alligator.” –Bribaby

“And the lesson of the day is ‘There is a right place and a wrong place for heels.’ Take it to heart while Mr. Alligator does his part for our gene pool.” –Artist formerly known as Ben

“Jeeze, look at Ian stomping his paunchy ass away there. He looks like Marlon Brando chasing a wheelbarrow full of Big Macs.” –jake!

“‘But the inch-long youngsters, once they hatch, have no family loyalty.’ Hey, Jack Elrod’s kids! Would it kill ya to call your old man once in a while?” –gleeb

“…the best thing about this strip is the Crimestopper’s Textbook panel, in which some weepy stocky kid has found where the sidewalk ends.” –commodorejohn

And let’s give it up for our advertisers, who are the very hottest.