You know, I think new Gil Thorp artist Rod Whigham is really starting to find his footing in this strip, creating evocative scenes for our Milford heroes. Yesterday, he served up a sort of film noir pastiche, with tough, wise-cracking heroes and the dames that break their hearts; today we go further back, to the Middle Ages, as miserable peasants pull up their rough-hewn hoods for protection from the pelting rain as they trudge back to their leaky, plague-infested hovels. You can tell how hard it’s raining in panel three: it appears that Gil’s flattop has been so thoroughly soaked that it’s lost structural integrity.

I was about to say that panel one was kind of edgy for a newspaper comic, as it features two men who are clearly drunk — and not happy, wacky drunk, but bleary-eyed, vaguely depressed and irritated, and surrounded by empties drunk. But then I saw panel two and realized that booze was least of this comic’s problems. 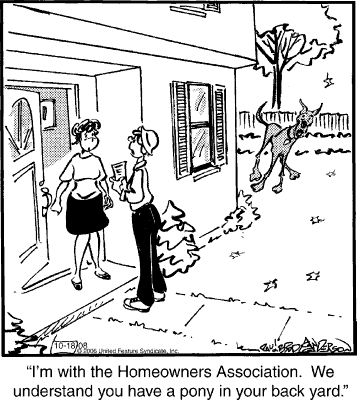 Marmaduke is about to kill and eat yet another poor soul who’s come to the front door of his house, but at least in this case you could sort of argue that it’s in self-defense.