I hope you will have a little patience before we get to this week’s COTW. I’ve been meaning for some time to share with you a fascinating item I received in the mail from faithful reader loudfan, and have only today gotten around to making some scans of. Behold, the glory and majesty of Mark Trail’s ® Book Of Animals (North American Mammals)! 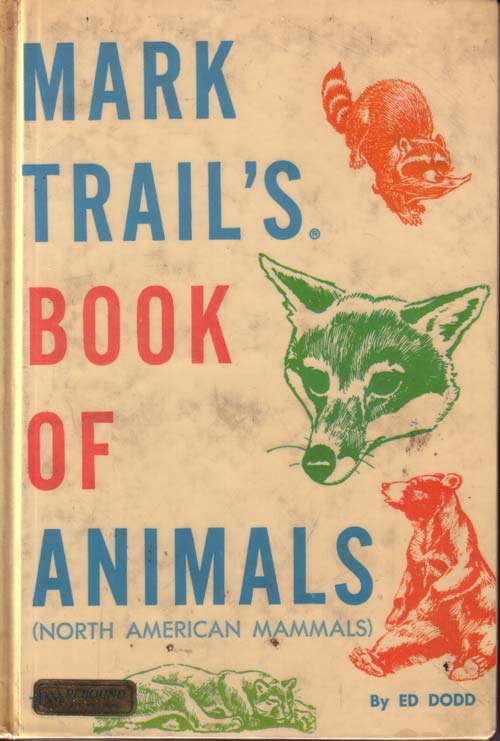 The book was published in 1955 and written by Ed Dodd, Jack Elrod’s predecessor at the helm of all things Trail. It’s essentially like a Sunday strip, in book form, with Mark only making a single cameo appearance on the title page: 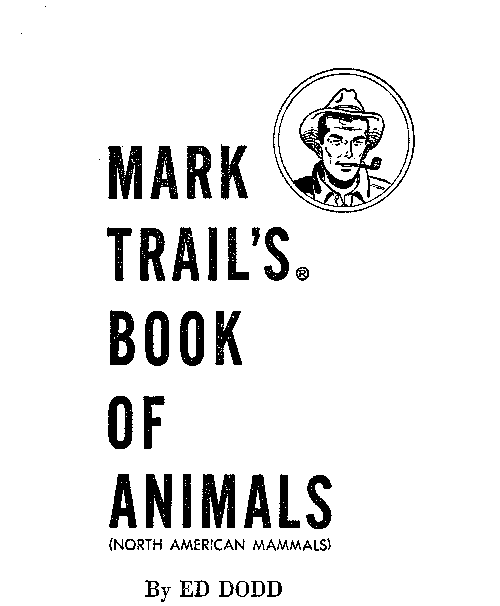 He sure looks pleased, doesn’t he? I wonder what’s in that pipe. 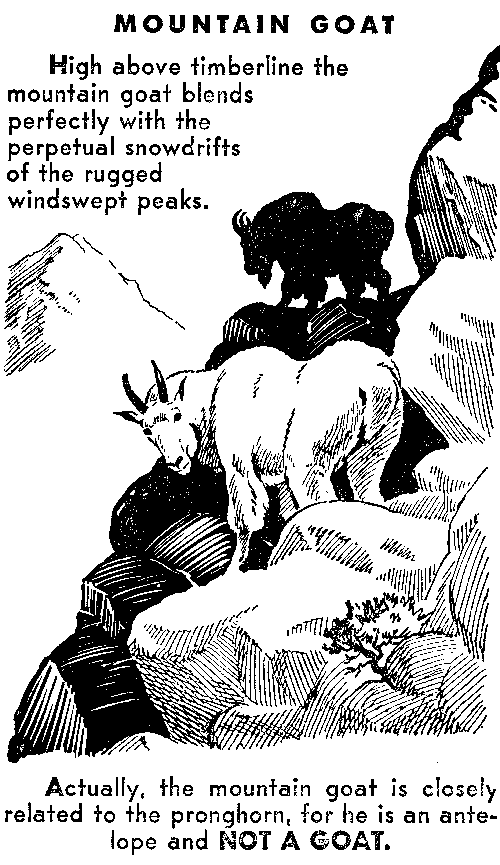 As you can see, Mark Trail has never been shy about proclaiming the hard truths in life, using boldface to blow tiny little minds everywhere with information about the mountain goat’s non-goat status.

Humans are actually pretty scarce in the pages of this book, but this appearance of an elderly foppish cowboy is particularly amusing:

Wait, are there people who seriously accuse mountain lions of cowardice just because they don’t want to get shot? Who on earth could this page be defending their reputation from?

Maybe from wolverines, who, when confronted with the incursion of armed humans into their territory, respond not by skulking deeper into the woods, mountain lion-style, but by arming themselves. WOLVERINES!

Finally, you can see that this feature’s fascination with dog vs. raccoon fights has deep roots:

Oh, and Mark, maybe raccoons wash their food because dirty food is gross. This page tells me more than I ever wanted to know about dinnertime at the Trail household.

I apologize for bringing this to your attention. I do it only because I thought it might shed some light on the obviously troubled Keane family. It’s a picture of Jeff, in hideous drag, pummeling some poor man to death.

If that linked sentence entices you, you’ll want to click forward to the 11th picture in the gallery (there’s no way to link to it directly, which is probably just as well).

And now! At long last! The comment of the week!

And the runners-up! Also funny!

“I’m fastidious enough to be a little concerned about Luann spilling her glass of soda in panel 3, but I suppose it’ll just end up mixed into the big puddle of Brad’s insecurity that’s already sloshing around the linoleum.” –One-eyed Wolfdog

“Dagwood’s candidate is Lyndon LaRouche, who will have lunch with anyone. I assume Dagwood was buying.” –Jana C.H.

“My god, when did Mary Worth become the abode of the undead? Mary, the funeral make-up still fresh on her face, gazes blankly as Jeff vainly struggles to remember the taste of food. Soon they will lurch out into the sunlight, their unsolicited advice an ungodly gurgle in their throats, forcing Toby to shotgun them both.” –Idols of Mud

“I think that by making a sailboat race part of the plot, Rex Morgan, M.D., has joined the worldwide hunt for something less interesting than Rex Morgan, M.D. I wouldn’t be surprised if this week ends with Rex explaining the difference between different types of knots and how that knowledge helped him win.” –ESJ

“The best thing about today’s Mary Worth is how the colorist gave up on filling in half the background. It’s as if he thought, ‘Eh, who needs green trees or a colored table cloth when Mary Worth’s just going to suck the life out of them anyway?'” –kelsy

“The seemingly metal pizza pan bothers me. Is Thel trying to set her house on fire? Actually … she probably is. I would if I were her.” –Angry Kem

“Mark knows that women are only interested in one thing; he just doesn’t know what it is.” –boojum

“Daddy Keane has thrown himself diagonally across the bed, burying his face in a pillow in the classic posture of one overwhelmed by grief. I wish I knew what tragic event in the Keane household brought this on. So I could imagine it happening, over and over again in my mind.” –Joe Btfsplk

“I know you all have been hating on Big Time as something of an underwhelming villain, and not without reason. But today’s strip shows that he’s not just a large man who likes clocks. He’s a criminal mastermind! Parking the truck near, but not too near the rear door of the museum? Genius! Because if the truck were too far away, then they’d have to carry the loot all the way to the truck, which would take longer. But if the truck’s too close, then they couldn’t get the door open. It’s thinking through details like this that make Big Time a foe to be reckoned with.” –Spunde

“I like that Peter Parker is a regular ‘Joe Six-Pack/Plumber’ like me. Not at all like that elitist Jamaal who uses a ‘bed’ to sleep.” –Red Greenback

“Uh, Peter, if you’re losing consciousness and gripping your left arm, you aren’t falling asleep, you’re having a heart attack. So much for spidey sense.” –Bribaby

“Perhaps at some point she hobbled him a là the film Misery.” –Calico, on why Dr. Jeff now has a cane

“If Margo’s talking tears, they’re someone else’s, brought on by their sweet, sweet humiliation.” –willethompson

“I’m not an avid enough reader of Gil Thorp to know who Dr. Wally Lamb is but I assume he’s the strip’s resident mad scientist based on (A) the fact that he’s wearing a lab coat and glasses, and (B) in panel 2 he appears to have shrunk himself to about 6 inches tall. Judging by the total lack of surprise on his wife’s face, this happens all the time.” –Rachel K

“Luann is steadily becoming a race to see which couple will not have sex first.” –Anonymous

“Don’t hold your breath for diversity in this comic. There aren’t even any characters with brown eyes.” –Charlene, on the prospects of a gay character in Mary Worth

“Of course pluggers don’t have flowers. They can barely care for themselves.” –tj

Unlike the mountain lions, many were brave enough to put money in my tip jar! And our advertisers are as formidable as a wolverine: