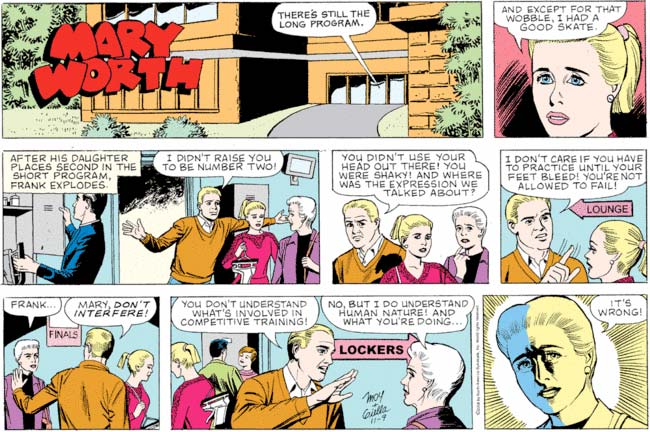 So for weeks now we’ve been watching the slow-motion buildup in this storyline, seeing Frank berate his sad sub-Olympic-level daughter, and wondering “When? When will the meddling begin? For the love of God, when?” Today, my friends … today is the day that the meddling begins. In the final panel, you can get a sense of the terrible wrath about to be unleashed as Mary’s face turns unnaturally blue and yellow and radiates pure meddling-energy. Her awesome and horrifying third eye is also beginning to become visible.

By the way, Frank, in case you’re wondering, it was the phrase “Mary, don’t interfere!” that sealed your fate. You may as well have danced in front of a lion shouting “Lion, don’t chew off my genitals!” while wearing underwear made of raw meat. 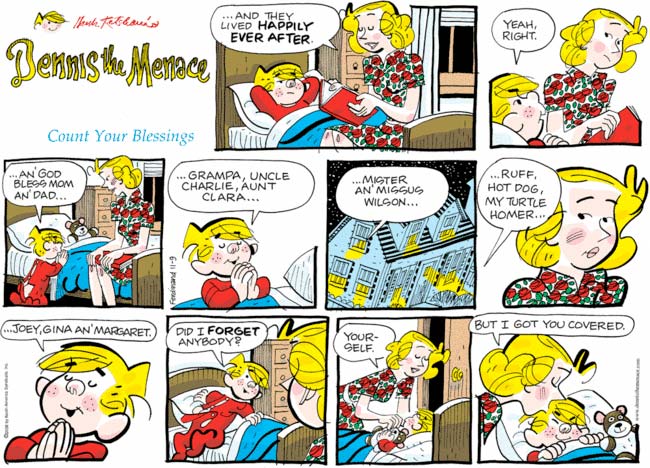 Here’s another entry in my occasionally interesting series of Comics Whose Tones Are Fundamentally Changed By The Throwaway Panels. Without that first row — which doesn’t appear in all newspapers — this strip consists of stomach-churning anti-menacing, in which our supposed hellion asks a loving God to shine grace upon all the people in his life, even those with whom he has an adversarial relationship. However, the opening panels reveal Dennis’s fundamental disbelief in anything so trite as a “happy ending.” In that light, his prayers can be read as a desperate plea to stave off the inevitable pain, heartbreak, and sorrow that will afflict his friends and neighbors.

And speaking of pain, heartbreak, and sorrow…

“Okay, everybody! Say: achievement! Because even though you’re all 47 or 48 and yet look fifteen years older, it’s quite an ‘achievement’ that you survived being struck dead by cancer, or war, or cancer, or general despair.”

Also! In unrelated news, this week Amos and Edda, the two lead characters in 9 Chickweed Lane, finally had the sex, as indicated through the cartoonist’s usual elliptical methods. I read 9CL but don’t comment on it much, mostly because it’s simultaneously better in many ways than most of the strips I make fun of here and also is irritating to me in ways that don’t produce humorous commentary but rather just peevishness. However, all week commentors have been demanding my opinion on the Great Deflowering, which finally led me to write, in the comments section of the previous post, the following:

Upon reflection, though, that is actually a kind of funny thing to say, if I do say so myself, so I thank all of you for pushing me out of my comfort zone.