As there seems to be some confusion over the meaning of this cartoon among this blog’s commentors, allow me to explain: our current economic crisis, the author posits, has the same roots as previous crises, and had we only remembered the lessons of history, we would have been able to avoid it. The two young ladies symbolize us, their falling asleep in their history class (presumably collegiate and taking place in a large lecture hall, the doors to which are at the right of the panel) represents our inability to learn from the past, and their barrel-wearing state represents poverty, the end result of the current crisis. The last bit is true because people who are clothed only by large, wooden barrels are a Universal Comics Symbol For Poverty of long standing.

I’m completely uninterested in discussing the didactic content of this cartoon, but it does bring up a question I’ve always found completely fascinating, which is: why are large, wooden barrels the Universal Comics Symbol For Poverty? I mean, I know I’m a decadent 21st century denizen who has grown accustomed to wearing garments that in relative terms cost very little, thanks to helpful Southeast Asian children with tiny, nimble fingers — certainly less than a finely crafted barrel. But is it possible that there was a time when a sturdy, wooden barrel with metal … circular dealies … that hold it together (boy, I hadn’t realized how weak a grasp I had of basic barrel vocabulary until just now) was actually cheaper than, you know, clothes? Did people really go into some kind of old-timey second-hand clothes store, sell all of their clothes (including the ones they were wearing), then walk, stark naked, up the street to the cooper (see, there’s a word that I know) to buy a barrel to wear, and have enough cash left over to afford life’s necessities? Did that happen? Because if not then, you know, barrels, what the hell?

A lot of people excuse the things they say or do when drunk by claiming that the demon booze made you say or do them; but when you’re intoxicated, you really just yourself, with less of a filter. This should make however many “Margo expounds drunkenly” strips we’re going to be treated to utterly delicious. Today, we learn that Margo really resents having to identify corpses, especially the corpses of people that she didn’t get a chance to kill, and that she believes that the intensity of your feelings about a tragedy are directly proportional to your proximity to the location where it occurred. 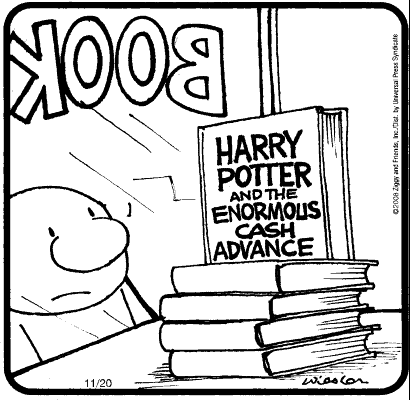 Oh, Ziggy! It does seem unjust that the author of a beloved and hugely successful series of novel should get so much more money than the creator of a beloved somewhat tolerable bald pantsless cartoon character, doesn’t it?

Some of you have mocked this panel for being so far behind the times, to which I say: it’s Ziggy. The last Harry Potter book came out only fifteen months ago. This is in fact shockingly current.