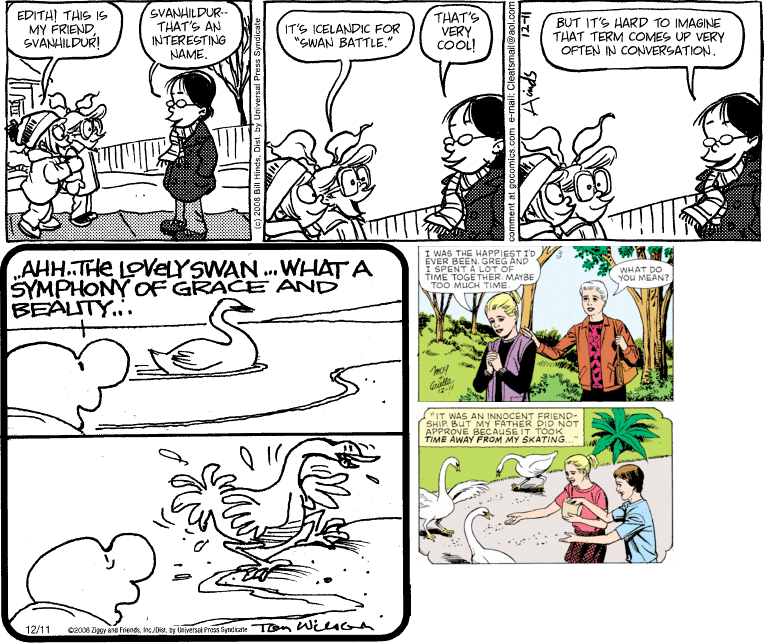 Cleats has spent the last few weeks introducing Svanhildur, aka “Swan Battle,” aka “the Gunk of Cleats.” I would like to believe that I don’t actually follow Cleats closely enough to notice when new characters are introduced, but I’m afraid that idea has now been conclusively disproven. Anyway, Edith mocks the idea that swan battles are part of everyday experience; however, my understanding is that swans are merely fancy elitist geese, and geese are — I know this from living for several years near Lake Merritt in Oakland, which was lousy with them — nasty, aggressive birds willing to do battle on the innocent and the helpless with little or no provocation. Take Lynn and her totally innocent, never-got-a-fingerbang-from-him-no-sir friend Greg, feeding these ungrateful parasites in today’s flashback frame. Lynn’s dad was mad at Greg for taking Lynn away from her skating practice; Greg’s parents, on the other hand, were mad at Lynn for fleeing the scene in terror while the savage swans pecked their poor son to death.

The swan in Ziggy, meanwhile, only does battle with the dignity of birds everywhere. Its obscenely lolling tongue is particularly unsettling. Ziggy is right to manifest his patented Undereye Bags Of Horror in response.

I really do keep waiting for this to turn out to be a continuation of the wacky tale of Jeff “Sacko” “6-9” “That kid who lied about his heart condition” Ponczak and Matt the Hat and Marty Moon and … you know, football season, this ostensibly being a comic about sports and all, but I’m coming around to the idea that maybe we’re firmly planted in a brave new plot of NUT BOY and armed robbery and now, two snobby prep school refugees washing up on Milford’s poverty-blighted shores! Our snooty transfer twins will be just like 90210′s Brandon and Brenda, except oppositely socially mobile, and one of them is named “Bryce” instead of “Brandon”, and they’ll probably be roped into participating in some kind of athletic activity. Perhaps Bryce will complain loudly about Milford’s lack of a polo team or yachting squad.

Yeah, lady, I’m sure this seems like a good idea now, but just wait until the beatings start.