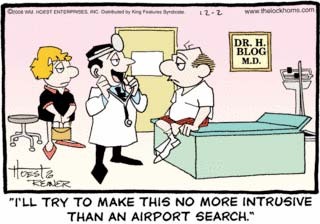 When I first started this blog, way back in the day, one of the things I was most perversely excited about was writing about the Lockhorns — I think I had this post written in my head before I had even set the blog up in the first place. Over time, I haven’t said as much about it as I have about other strips, but my weird admiration for its gung-ho commitment to marital heartbreak hasn’t wavered. Today’s installment features one of my favorite recurring aspects of the strip — Leroy and Loretta’s shared bleak, glum expressions, with eyes deadened by years of horror, as if they’ve just stumbled out of a concentration camp or something. Normally, a cartoon character about to have Dr. Blog’s finger up his butt would look comically anxious, but here Leroy just looks like he’s thinking, “Whatever. Nothing you can do can possibly wound my dignity more than my very existence already does.”

Loretta, meanwhile, is equally numb, for private reasons of her own. Maybe she expected to get a fleeting moment of satisfaction from Leroy’s prostate-exam-related panic, and is realizing that even that will be denied her.

Also, it appears that someone at Lockhorns central is fixated on airport security, and rectums.

Speaking of emotional devastation, I was pleased to see Marvin’s grandparents left completely shattered as their plans for retirement fall to pieces around them, but that’s just because I hate Marvin and want all of its characters to suffer horribly. Maybe they’ll have to move in with Marvin’s parents! And everyone will get on each other’s nerves, and Marvin will poop in his pants while thought-ballooning wryly! Oh, the hilarity.

Now, Mark Trail — there’s a guy who never lets things get him down! Why, here he is, tied up, being held at gunpoint by a dude named “Rabbit,” being handed over to a burly fellow with a Fu Manchu-ish mustache named “Salty” — and he’s keeping his cool! Almost as if he’s secretly pleased, for some reason. I can’t wait to see what happens next!