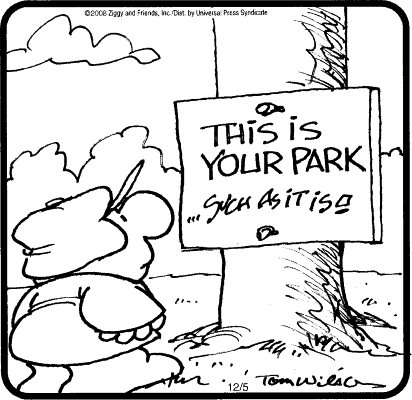 OK, a confession to get out of the way right off the bat: I laughed, more or less involuntarily, at today’s Ziggy. There, I said it. Not being accustomed to such a reaction, I lingered over the panel for a bit and noticed that “such as it is” on the punchline-sign is in a very different style of handwriting than the text above it — it’s scrawled in a slapdash fashion. Is this mean to indicate that “THIS IS YOUR PARK” is an official notice from Ziggy’s municipality, but “such as it is” is meant to be a graffito of some sort? If so, this reduces the humor content of the strip considerably, as insulting and/or aggressive placards issued by some faceless authority are about the only recurring element in Ziggy that I find tolerable. But then I thought up another scenario: what if the space below “THIS IS YOUR PARK” had originally been left blank by the strip’s artist, who couldn’t think of the right joke put in there, and then he went on some kind of day-long drinking binge, and stumbled back to his drawing board, and at last had an epiphany that yes, “such as it is” was perfect, it would even make the Comics Curmudgeon laugh, that smug asshole, what does he know? And sure, what with the booze the writing came out kind of wonky, but it was true, it did make the Comics Curmudgeon laugh, huzzah! Huzzah for alcohol!

Snuffy has bludgeoned one of his many rivals in the lucrative Hootin’ Holler meth trade to death with a frozen chicken. As in the Roald Dahl short story “Lamb to the Slaughter,” he disposes of the gruesome evidence by cooking it up for dinner. However, whereas Dahl’s story traffics in simple irony (the murder weapon is fed to the police investigating the crime), Barney Google and Snuffy Smith goes deeper (not that you would expect anything less): the killer chicken is fed to the local man of God, who is moreover told after the fact of his complicity in the terrible crime. How will the parson keep preaching the good word from the pulpit, knowing the atrocities that he’s participated in?

Who’s up for another several weeks of June Morgan being sexily cruel to the help? [Raises hand] Me! Me! I am!

Pluggers will make up a lot of crazy nonsense sayings to justify the fact that they’re generally too hung over to get to work on time.