If there’s one thing that Marvin does well repeatedly, it’s come up with some labor-saving gimmick joke that can serve as a template for multiple days worth of material. We all remember the week of pure horror that was “Belly Laffs,” in which each new day proved just how not-funny a joke about women gaining weight when they’re pregnant can get. If there’s anything to console us during this cryspace.com nightmare, it’s that we started in the middle of the week, which means that we have at most two more days of this left.

Also, as a red-headed American, I resent the implication that the lady gingers need to bill themselves as blondes in order to increase their sex appeal. Nobody can dispute the attractiveness of redheads, people! And as a human being with a shred of decency, I am disgusted by the idea of a baby making her profile sexy, what the hell, this is monstrous beyond description.

Little Sarah has always been a precocious child, and that, combined with the affluent upbringing her father’s medical practice has provided, may be bringing her down a very dark path, as she seems extremely intrigued by the prospect of joining this wizened alcoholic aristocrat in hunting a wily urchin for sport. “Come, child, let me tell you about the thrills of the most dangerous game!”

Some people have doubted whether Margo is really as awe-inspiring and terrifying as all that. All I can say is that if any roommate of mine had left me a list of imperative mood verbs like the one seen here, I’d respond less with a resigned sigh and more with a string of obscenities. Either Margo really can kill with her mind, or the surreptitious, never-talked-about sex must be amazing. 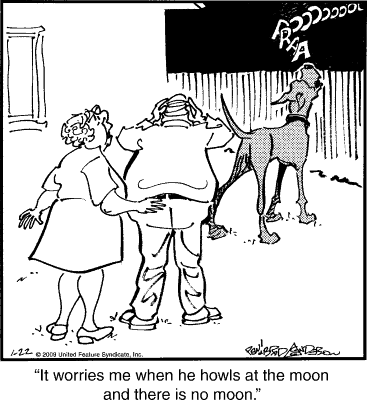 “Howling at the moon,” ha! Marmaduke is actually summoning his demonic Master to appear and accept the blood sacrifice of these two innocents. Naturally, Marmaduke will carry out this sacrifice himself.

Ha ha, Momma called her daughter a tramp! A tramp wearing a tiny, tiny lampshade as a hat.