“No … but my luggage has! Ha ha ha! Do you get it? Because sometimes airlines will put your luggage on the wrong plane, and it will ‘visit’ cities and countries that you’ve never been to! It’s an ironic little indignity of modern life, that many people can relate to! Ha ha ha! Oh, mercy! … wait, what do you mean there’s a second panel? Um. Twice. It happened twice. The luggage thing, I mean.”

The current Luann story has been painfully stupid, as in so stupid that it’s been causing me real physical pain. This sexy fundraising event has been necessitated by a chain of events that ceases to make sense if you think about it for more than fifteen seconds … but since this is Luann, Ground Zero For Queasy, Awkward Sexuality, the plotline has obviously been elaborately constructed to lead to this moment. Because remember, it’s OK to include a lovingly detailed drawing of a teenage girl in a bikini in the comics, as long as you call her a tramp. 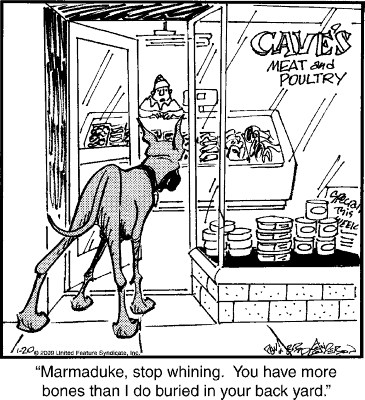 Ha ha, foolish Cave-Man! Marmaduke can never have enough mangled, dismembered bodies in his backyard. Hand over the meat or you’re next.