The last time Mary Worth decided to build a story around this new-fangled “Internet,” was last summer, when Tobey Cameron foolishly decided to engage in e-commerce rather than patronizing one of her local shabby strip malls. Obviously she immediately fell prey to a terrible phishing scam, which gave her nightmares about Ian leaving her because of her foolishness. (In the end, the punishment was much worse: he decided to stay.) The takeaway, obviously, is that the Internet is nothing more than a four-lane highway for deceit that good, honest people should stay away from at all costs, which means that Adrian’s new guy will be one or more of the following:

Not that there’s anything wrong with at least two of those things! But let me say this: my wife and I met on an Internet dating site, and, perhaps more relevant to this strip’s demographics, so did my father-in-law and his fianceé, and if this plotline ends with Mary narrowly preventing Adrian from being made into a lampshade by her maniacal online paramour, leading many lonely Mary Worth devotees to hurl their devil-computers into the street in terror, then I will be very upset! If, on the other hand, the Internet is shown to be a fun and exciting way to meet new people, I will be pleased, even if the result is a surge of new users on Match.com with screen names like DrJeffLover. 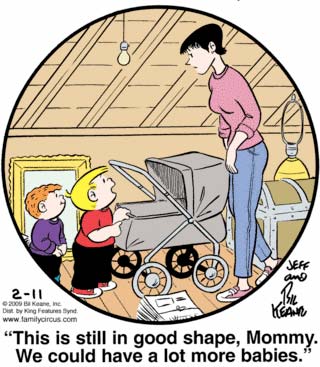 Possible sets of individuals that Billy might be encompassing with the pronoun “we”:

It’s a sad day when the alien plant-monster hypothesis is the least disturbing.

“Also, seeing as the only people who ever dressed like this were FBI agents, circa 1964, I need you to tell J. Edgar Hoover that I’ll be out of the office for a few days.”