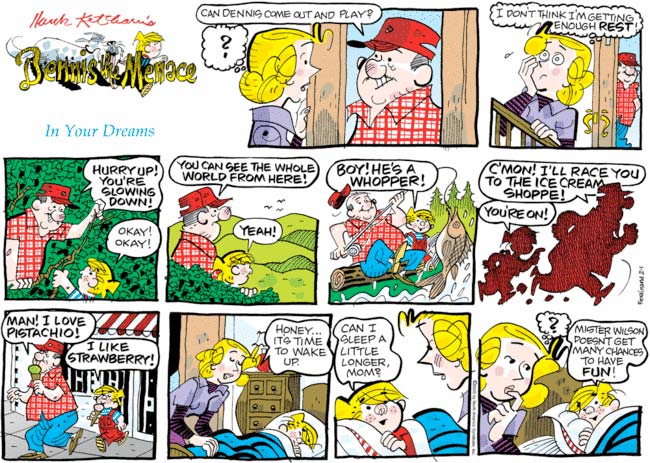 “OH NO,” I thought as I read today’s Dennis the Menace, “THIS IS AS NON-MENACING AS IT GETS!” Dennis having sleepy-time fun, engaging in ludicrously wholesome pursuits with Mr. Wilson? “MAN, I LOVE PISTACHIO!” “I LIKE STRAWBERRY!” Gah! SO NOT MENACING AT ALL.

But really, give this strip a moment’s thought (which, for the record, is about three-quarters of a moment more than it deserves). Look at the fixed, deranged grin on Mr. Wilson’s face, particularly in the first panel of the second row. The poor man is obviously not enjoying himself; he’s a mere puppet in Dennis’s dreamworld, where the towheaded monster is all-powerful and is forcing the put-upon retiree to leave his comfortable home and consort with his greatest nemesis. Dennis’s plea in the final panel isn’t some cutesy, childish inability to understand the difference between dreams and reality; in fact, he has created some kind of Nightmare On Elm Street shared universe with the fitfully sleeping Mr. Wilson up the street, who is being compelled by forces he doesn’t understand to frolic for another’s amusement. Dennis thinks he’s getting Mr. Wilson to “have fun,” but like most children, he doesn’t understand that his likes and dislikes aren’t shared by everybody. George Wilson will run and fish and hike and eat ice cream, a rictus smile on his face, until he drops dead of a heart attack.

And even if this really is just an ordinary dream, one has to wonder about Dennis’s unhealthy fixation on his elderly neighbor, to the exclusion of others who might actually want to go fishing and hiking with him. One imagines him breathlessly recounting this wonderful dream over the breakfast table, while he father silently dies inside. 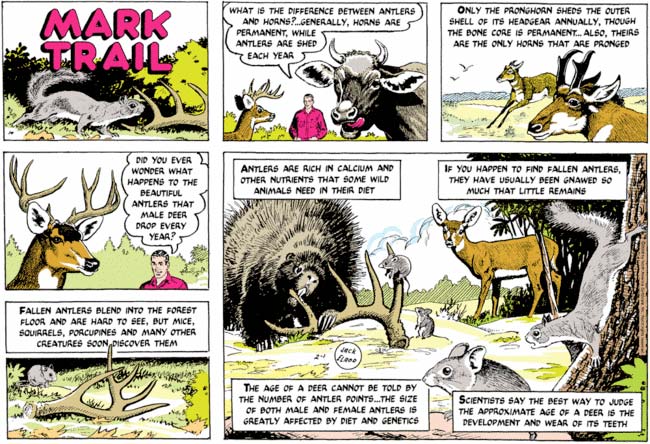 I’m increasingly concerned about Mark Trail’s mixed messages; first he’s all “Wild animals are not pets” but now he’s like “Sure, go right up to that deer and look in its mouth to figure out how old it is, can’t see anything going wrong with that.” At least he didn’t give the answer I expected, which was to cut the deer in half and count the rings.