“Ethan Noll — Ethan Noll? Like ethanol, the volatile, flammable grain alcohol that some think could be a valuable fuel source, and which is often derived from corn, which in turn is the main crop in Iowa, the location of Professor Noll’s university? I wonder if this offers a clue of some sort to the denouement of this episode? Naw! Too much of a coincidence. Literally every human being I meet has a name that’s a pun of some sort, and only half of those turn out to be relevant.”

There are many things I dislike about Dick Tracy — currently at the top of my list is its decision to renew its earlier flirtation with Comic Sans (HEY GUYS JUST BECAUSE IT’S IN BOLD DOESN’T MEAN WE CAN’T TELL) — but the weird fractured chronology on display in the second and third panels, in which an event is first recounted second-hand and then shown to us in flashback, isn’t one of them. This is actually a fairly common technique in the strip, and I’ve grown to appreciate it more as I read it; it at least adds a little narrative interest among the stubby fingers and the bludgeonings. It reminds me of the weird editing in Steven Soderbergh’s The Limey, only with even more graphic and brutal killings.

“Yup, I’m all set to start writing again, and AAAH AAAH AAAH IT’S THE REANIMATED CORPSE OF MY DEAD WIFE!” Ha ha, just kidding, Les wouldn’t be terrified by this prospect; the appearance of his wife, resurrected as a shambling zombie-demon, would be the highest form of erotica for him.

I was blessedly out of the FW loop during the storyline being described here, but many commentors seem to recall it as one of those irritating lesser-Shakespeare-comedy-type plots where the protagonists keep having their meeting thwarted by random circumstance (much like Darrin and Lisa’s attempts to track each other down before the latter’s death). If that’s true, then surely Les will be able to produce a new book that’s as big a flop as his last one, and the cycle of misery will be complete.

Hmm, Second Officer Tomas, who in previous appearances looked to be of Latin or African descent, has made an appearance today looking thoroughly Caucasianized. Perhaps he’s still desperately attempting to placate the drunken, belligerent WASPs who make up most of the ship’s passengers, and thus is switching races himself so as to put them all at ease. Thus the patient requiring medical attention is Guido himself, with Rex being called upon to provide more enwhitening injections. 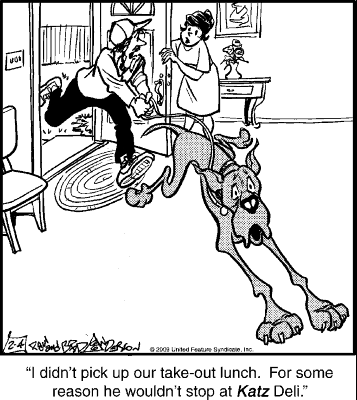 Marmaduke’s owner can’t get the dog to stay off the furniture, stop digging up the back yard, or refrain from eating the neighbors, but at least he’s managed to instill his own virulent anti-Semitism into the hell-beast. 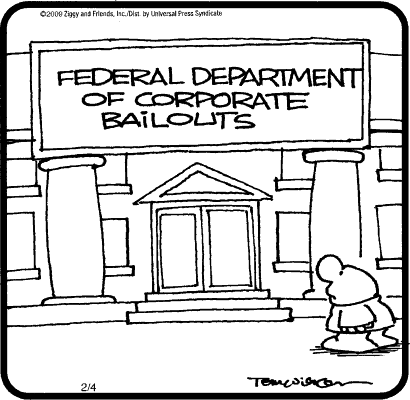 Hey, everybody! Have you heard about all the corporate bailouts? Ziggy has, apparently! Maybe someday the strip will get around to making a joke about them.