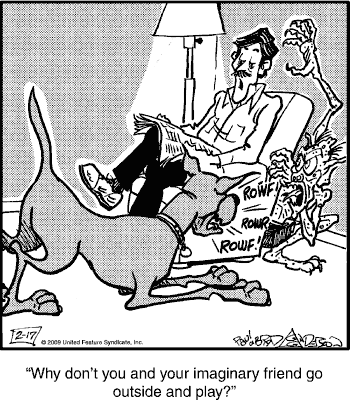 As regular readers of this blog know well, the overarching theme of Marmaduke is “Marmaduke is a terrifying predator who eats human flesh.” And yet, occasionally, we are given a glimpse of another narrative arc, namely “Marmaduke interacts with monstrous alien creatures.” Could it be that the devil-dog feels a certain sentimental instinct to keep those humans with whom he lives safe from extra-terrestrial assault? Or is he merely protecting his food supply from potential competitors?

So imagine that you’re bringing your new boyfriend out to dinner to meet your father for the first time. Which of the following scenarios would make the evening feel more like hell on earth?

Well, if you’re Adrian Corey, it looks like you won’t have to choose!

Appropriate response to Margo’s question: “Gee, I dunno; I think there are some Hot Pockets left in the freezer and there’s a Chinese delivery menu on the fridge. Gary and I are going to go to my bedroom and screw like bunnies now, so feel free to turn up the music if that’s going to bother you.”