Er, OK, now that I’ve gotten that crass joke out of the way, can someone please explain why Miss Buxley is sporting the Cousin Itt look in the second panel? Is she suddenly ashamed of her quite public mooning over the strip’s title character? Has she realized that even in the sweetheart’s picture on her desk, her paramour’s eyes are invisible, and she’s doing it in some kind of misguided solidarity? Does she even have enough hair to realistically flip over her face like that? Have we just never seen her right profile before?

I break my usual code of silence about Cathy to point out that today’s installment revolves around two dudes’ fantasy of an office lunchtime conversation degenerating into hot girl-on-girl action. It’s enough to make you forget that this is probably the first time the word “colon” has appeared in the strip.

It’s true! Her jumper shits, the presence of her arch-rival bitches, and her dad’s new relationship assholes. In other words, everything motherfuckers.

Ha ha! Herb is smirking while he imagines his mother-in-law being tortured, in hell, for all of eternity! How charitable of him.

Actually, in keeping with this strip’s total commitment to nonspecificity, Herb doesn’t actually mention hell per se. People of all faiths are invited to imagine whatever kind of system of post-death punishments they prefer, so long as it involves fire. 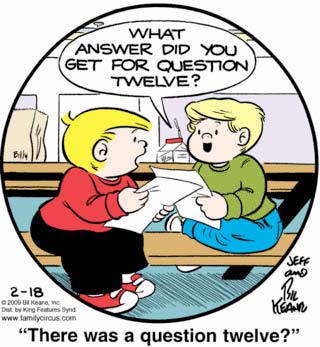 This cartoon would be vaguely amusing, and not a savage exposé of Billy’s profound stupidity, if these kids weren’t actually looking at the test papers they were discussing. It’s a wonder Mommy even bothers writing Billy’s name in tiny letters at the bottom corner of his lunch, because he’s surely too dim to read it.