Greetings, reader! Here’s something a little different today: a look at how comics artist can best grapple with the tough economic times in which we live. For instance, many comics creators may have become vaguely aware that such a thing as a “stimulus package” exists, and that it exercised much passion and energy in this country before it was passed by Congress several weeks ago. Thus, “stimulus package” is both an important and a potentially funny phrase. How can it be slipped into a cartoon in such a way as to please the audience?

The appearance of “stimulus package” in today’s Momma leaves much to be desired. It’s not clear that the author knows exactly what “pork” or “pork item” means in this context. By associating the term with the distasteful Francis Hobbes, we are forced to contemplate many of the word’s meanings in unsettling ways. Would it be possible to somehow use U.S. tax dollars to actually purchase Francis, as a means to benefit some Congressman’s home district? Is Francis protesting — perhaps protesting too much — against claims that he is in fact composed of delicious pig meat? Is he begging the passing dwarves not to “pork” him as they put their money in his cup? The mind boggles. 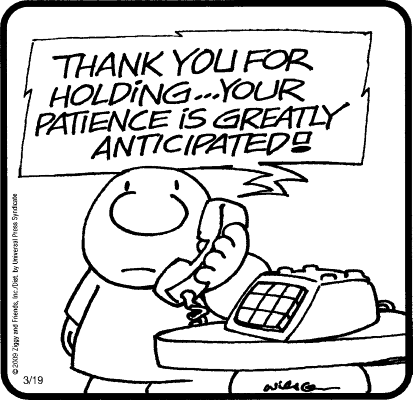 Ziggy, as is its wont, takes a more abstract approach. This stimulus package sure sounds expensive! With all this government spending, can America afford luxuries like punchlines, or jokes, or humor of any sort? You can be sure that Ziggy will do its part to conserve these precious national resources until the crisis is safely past.

Thanks for tuning in for our recession primer! Tune in next time, when you’ll find out just how devastated your characters should be by tightened economic circumstances! Learn to distinguish between “sympathetic,” “maudlin,” “mawkish,” “Dickensian,” and “suicidally depressing.”