Well, it looks like it’s that time of the season again, when Gil realizes that whatever squad he’s doing a half-assed job of coaching at the moment won’t be going to the playdowns, so he needs to make a half-assed attempt to intervene in the most egregious of the stupid dramas playing out among his charges in order to vaguely justify his existence. (If he doesn’t do this at least once every three months, they’ll take his name off the strip entirely and call it The Magical, Boozy Antics Of Marty Moon.) This spring’s crisis involves the Larsons, who are quite reasonably worried that they’ve moved their kids from the warm, nurturing environment of New York City into some kind of degenerate hellhole where they’ve become romantically entangled with vest-wearing fans of wacky, theatrical surf-rock bands. Gil needs that coffee, as he’s almost certainly come straight to Chez Larkin from PUB, as his drunken logic indicates. “See, Ashley and Dylan are all right kids … but, uh, don’t judge Milford based on them! We’re better than they are! Not that they’re … bad … per se … uh, what’s with those rays coming out of your eyes? Are you trying to use your mind control powers on me?”

Well, there you have it. The big TJ mystery that’s been percolating since at least last Thanksgiving has been … solved! All thanks to a paragraph of exposition crammed into a single panel during a porch-based conversation. That should prove wrong everyone who thought the resolution to this plot point would be prurient, or interesting.

What kind of message are we sending to the young people of today? Look at this irresponsible bird, giving birth to an out-of-wedlock egg and then just strolling casually off! Where is this supposed to be, the ladies room at Parrot Prom? 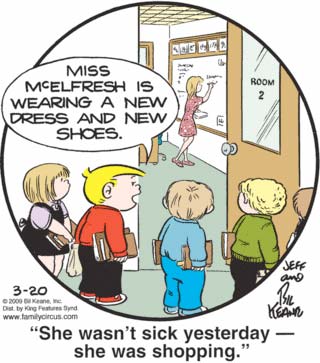 The way this little mob of melonheads is gathering at the open doorway, all staring silently at their teacher in her new short skirt and listening to Billy’s slander, is making me nervous. Miss McElfresh is about to find out how they deal with the Sin of Pride here at the Keane Kompound. (Hint: It involves rocks. Many sharp rocks.)