Thank goodness Mark Trail has given up on its attempts to depict all-too-realistic and depressing human behavior and is going back to its bread and butter: attempting to depict hilarious and completely incomprehensible human behavior. Because the following list of activities is in order of increasing conspicuousness, obviously:

OK, so Luann is clearly never going to give us less of … this, so from here on in, I want more. More, do you hear me? The only way this strip’s never-ending stream of queasy sexuality will become palatable to me is if it just goes completely over the top, turning the whole thing into some ludicrously repulsive French sex farce. I want to see Mrs. DeGroot seducing TJ for information (“TJ, I can’t stop thinking about the other day in the bathroom … but my fantasies would be so much hotter if I knew what you did for a living!”). I want to see Brad accidentally invite Toni to dinner at an S&M club (“Gosh, I thought that meant they served salad and macaroni!”). I want to see Bernice arrange a tryst between her soldier brother and Delta — and then retreat back to her room to watch via the hidden cameras and masturbate furiously. I want to see Gunther at the San Diego FurCon ’09 after-party, grinning bashfully while being serviced by dozens of obedient piggies. I want to see Luann and Elwood … no, wait, never mind, even I have my limits.

Sunday’s neglect-o-thon made the case for a Child Protective Services visit to the Flagston residence, and today that case just got a little bit stronger. As Trixie sits alone in the middle of the floor, surrounded by scattered toys, she notes that her family “disappears” every day, but doesn’t mention anything about anyone coming to her house in their place.

Barry is right to be concerned. Curtis does not have the right attitude to find much financial success as a prostitute. 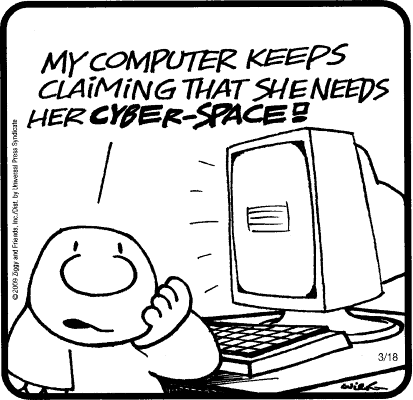 Even Ziggy’s computer is repulsed by his sexual advances. 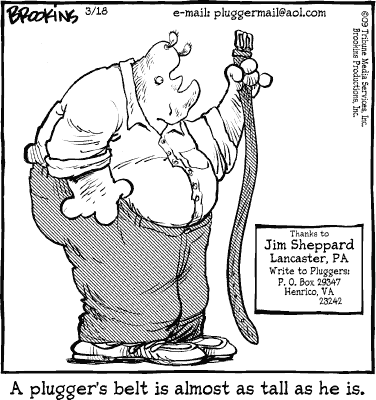 Sure, they eventually put on the belt, go to their soul-killing jobs, then come home and eat pizza and drink beer in front of the TV until they doze off; but for most pluggers, that moment in the morning when they contemplate suicide is, perversely, the high point of their day.