Folks, we’re seeing a real epidemic here. Faithful readers have already brought to light the worst kind of joke recycling from The Family Circus and Blondie. Now we see that the boys at Walker-Browne Amalgamated Humor Industries LLC are getting in on the act, thanks to this damning evidence from faithful reader Tom. Compare the strip from last Sunday with an installment from 1987: 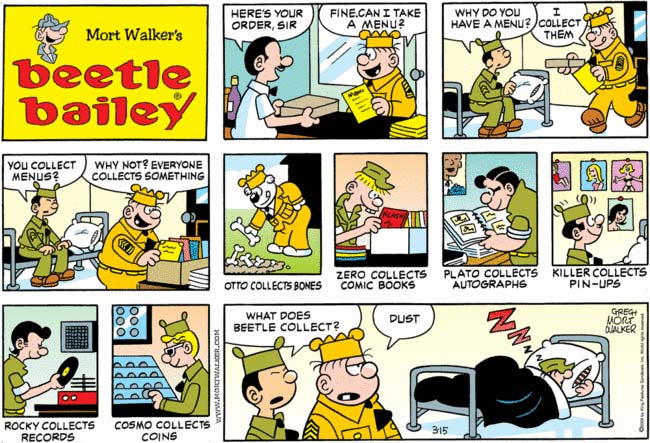 The sort of fascinating thing here is that, unlike the other two self-plagiarized strips, the new Beetle Bailey has been entirely redrawn; only the gag has been recycled. This is funny because the typical Beetle Bailey gag isn’t really that hard to come up with, if you follow me. The minor differences between the two strips are kind of interesting as well: apparently in prudish 1987 we weren’t allowed to actually specify what kind of calendars Killer collected, and while Reagan-era Rocky rocked out to music recorded on that time period’s favored format, the current incarnation is some kind audiophile retro-geek. You should also note that, against all odds, the set-up throwaway panels are even lamer in the 2009 strip, possibly because the artists are now uncomfortable portraying American soldiers as desperate beer-guzzling alcoholics. (Portraying them as semi-catatonics is apparently still OK.)

And now, the moment you’ve been waiting for … your COMMENT OF THE WEEK!

“I admire how orderly and polite Tommie’s thoughts are in the morning. Under similar circumstances, my thoughts would’ve probably been: ‘Who the fuck…? Goddamn, can’t I even have my mug of milk in the morning?'” –Joe Blevins

“No, the woman your dad is seeing tonight, while I sit with you kids, is his girlfriend. I’m … Tommie.” –ohyes

“Oh, Peter Parker is happy. I thought that was a douchey look and statement of sarcasm. ‘Oh man, that’s great! I’ll have the smell of mothballs and Jean Nate perfume to look forward to.'” –scruffylove

“If poor old Aunt May is so frail that the lights unexpectedly being turned off can trigger a medical condition, then I’m sure that Peter’s horrible, horrible smile in the third panel will cause a stroke.” –Alan’s Addiction

“I am sincerely grateful for today’s Blondie. In this sadly diminished post-Scaduto world I had thought never again to see a squat, impossibly-legged man whose ensemble seems incomplete without an ‘I like Ike’ button characterizing something as ‘the bomb.’ I’m just going to go ahead and assume his name is Boffo Barfington.” –Violet

“I interpret Kenley’s ‘Oh’ as an abbreviated form of ‘Oh, sorry, I thought there might be something interesting about you.'” –He Brought Queenie Baby Jesus

“I think my favorite part of Funky Winkerbean today is the news announcer’s use of ‘plummet,’ a fantastic verb that would normally not find much use in the Funkyverse, as the characters and their hopes and dreams do no so much ‘plummet’ as ‘spiral slowly into a black pit of despair’ from which there is no escape. Oh, and also, cancer.” –Lorna

“The irony is that Crankshaft used to drive Funky’s bus when Funky was in high school. Now Funky is going to die before Crankshaft. That should bring a smirk to his face.” –Racing J

“‘Queenie,’ you and Ted CAN make it on your doctor’s salary. You may have to budget, though. No more volumizing shampoo — oops, you already have cut back in that department.” –blackgoat

“What sort of power does Adrian have over Ted that instead of inspiring confidence and diverting attention away from his real schemes, Ted confesses his problems and failures at her slightest raised eyebrow? ‘I have no money! I lost my job! I knowingly wrote a bad check for your dad! I’m marrying you for the money!’ Soon he’ll be curled up at Adrian’s feet, sobbing out things like, ‘I proposed because you remind me of my dog! I can’t spell! This mustache is pasted on!’ Adrian’s right: her dad won’t worry about the check. Dr. Jeff will be too horrified at seeing a younger version of his relationship with Mary Worth to think about anything else.” –Eldaglass

“Watching Funky Winkerbean descend into all-out open sadism is like the comedic equivalent of the relief that comes when you finally begin to vomit after spending ten minutes hovering nauseously over the toilet bowl.” –commodorejohn

“There’s been a lot of talk about Funky’s junk today, but we still haven’t addressed the elephant in the room. Does it or does it not smell like mozzarella?” –Artist formerly known as Ben

“The gift of a crepe maker says, ‘I’ll still be here for breakfast, but instead of staying in bed with me, I’ll expect you to get up at 5 a.m. and spend hours cooking me fancy French meals.’ It’s the kind of mixed message you’d expect from a woman wearing a bathrobe over a turtleneck.” –BigTed

“I’m pretty certain the phone company yanks out the old payphones and takes them away. Funky probably has some abandoned fetus in that box.” –Rusty

“It’s time for Funky Winkerbean to reconsider that jaunty font in the title panel. That worked fine when it was a silly school comic, but it looks absurd in the present version, and doubly so when it has the wan balding pate of Miserable Q. Avatar floating right there beside it. Batiuk needs to look into some more modern shit like Times New Sarcoma or Dead Wife Sans.” –One-eyed Wolfdog

“She knows how to turn on the TV? She’s doing better than me, with the eighteen goddamn remotes.” –The Restless Mouse

“Current tweener storyline aside, does the artist of [Judge Parker] get paid by the cup size?” –thurston unger

“Mary’s head is just swimming with where to start meddling! ‘Who do I track down first?! This mysterious lover, or the health inspector to close this place down for using the bathroom as a salad prep station?!'” –Rachel211

“Mark Trail’s narration box must have been on a pee break or something. ‘What’d I miss? Oh, did panel 1 confuse you? Well, the man has the camera now, see? That’s about all I got, sorry.'” –JP (not Judge Parker)

“Many a young man is advised to ‘think about baseball’ so as avoid the embarrassment of premature ejaculation. However, Gil Thorp takes this to new heights, avoiding Coach Mrs. Coach Thorp’s obvious sexual come-on (‘we both have some gaps‘) by focusing on Matt Rogers’ lack of hitting prowess.” –DownwithOPP

“I just love that Slylock has a wardrobe labeled ‘disguises’. I also love that it contains 1) a bunny suit, 2) a lion suit, 3) a rat suit, and 4) a hat, a whip, and a pair of tall leather boots. Slylock is thus equipped to sneak into virtually any kind of S&M club in town, be it herbivore, carnivore, omnivore, gay omnivore, what have you.” –Li’l Bunnë FooFoo

“I love the first panel in today’s Mark Trail, and not only because it looks like the guy blackjacked Rusty with his own camera. I like its wordless violence, opening today’s strip with only an afterthought of an explanation in the third panel. It’s almost pop art. It should be pop art. How much do you think it would cost to blow this up and hang on a wall, so that I can go to sleep each night with the cheerful thought of Mark’s freaky-deaky kid getting robbed and punched out by a subhuman goon?” –teddytoad

Often imitated and never duplicated are those who put some cash in my tip jar! And our advertisers would never self-copy: