The tale of Bald Guy And Other Guy, The Dumbest Criminals Around, continues to roll onward in hilarious fashion. Here, Bald Guy, after a failed attempt to buy Rusty’s fancy digital camera and the incriminating photos within, rips the thing out of his hands so vigorously as to send the hapless urchin tumbling backwards. So far so good, but then Bald Guy’s face is mysteriously clouded by terror, and he hurls some cash and what appears to be his wallet at the boy before scampering off on his elevator shoes. It all leads one to wonder what crime this duo might be on the lam for in the first place. Did they rob a bank and then carefully fill out a withdrawal slip?

“Oh, hey,” you almost certainly were not thinking, “Whatever happened with 6-foot-9 Jeff ‘The ’Czak’ Ponczak, and his buddy Matt the Hat, in their new gig running Marty Moon’s old cable access show?” Well, they’re still wearing the exact same stupid clothes and throwing up the exact same stupid fake gang signs as they were five months ago. (Matt appears to have added a stupid vest to his ensemble, but the hat remains his trademark outfit component, which he emphasizes by pointing at it in panel two.) Panel three shows us Coach Thorp and Coach Mrs. Coach Thorp watching their antics and saying coaching-type things in response, which is really too bad, as what we want to see is Marty watching their antics and doing crying-type things in response.

Don’t bother reading the tedious explanatory text, which is just Slylock’s desperate spin after Max caught him changing into his giant rat costume; our favorite detective is actually suiting up for Midwest Furfest ’09, which, when you consider the fact that he’s already an anthropomorphic fox, ought to blow your mind.

The no doubt crotchless fursuits aside, I’m pretty sure that this is the first time we’ve seen Sly in his off-duty clothes. The green plaid jacket, yellow bow tie, and polka-dotted (or possibly just lint-speckled) baby blue slacks make his Sherlock Holmes get-up look positively normal. 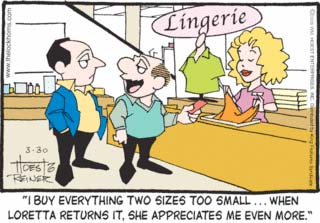 When I first read this, I thought that this, as backhanded and twisted as it is, might be the first vaguely nice thing I’d ever seen Leroy do for his wife. Then I caught a glimpse of whatever that is in the box, and tried to imagine an item of lingerie that was that particularly barftastic shade of orange. Then I closed my eyes and rested my head on the desk.

I also have my doubts about any store that thinks polo shirts qualify as “lingerie.” At first I thought the puke-green specimen on display behind the counter was some sort of terrible combination of the polo shirt and the belly shirt, but then I realized that it was actually the perfect size for the torso of your typically dwarfish Lockhorns character.