Well, if it’s Monday, it must be time reveal another shameful instance of a legacy comic dipping into its own archives. Below is the B.C. from 8/15/05:

Followed, of course, by a comic from the B.C. collection Dip In Road, first published in 1969: 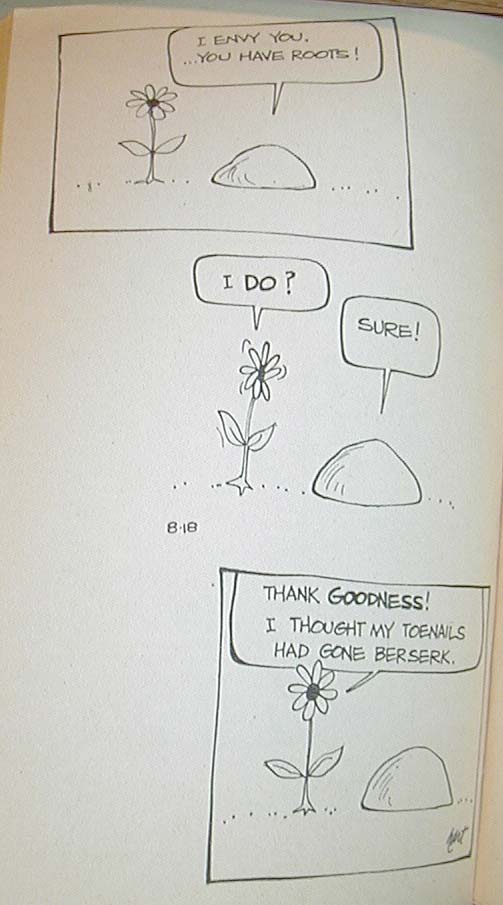 These come from faithful reader Suzii, who notes:

It stuck with me because I first read it when I was a little enough kid to have no idea what “berserk” meant. Now I’m all grown up and a professional word person, and I still have no idea what’s funny about this — let alone what’s so funny as to be worth a second shot at it.

Also! By now you are well acquainted with my narcissistic tendency to acknowledge comics that mention me by name. Well, I suppose I must now extend this to novels! The Tea Master, a novel currently competing for the Amazon Breakthrough Novel Award, mentions me and several other bloggers in the course of its adventures! It also features a “notorious” unicorn crap passage. Check it out!

And now, the moment you’ve all been waiting for: the comment of the week!

“That facial expression — it’s like he’s asking himself, ‘Where did my penis go?’ It’s OK, buddy, it’s just a towel.” –Donald the Anarchist

“All babies are evil. It’s only the comics page that has the guts to print this. The rest of the paper is intimidated by the power of Big Baby.” –Mac

“Hmm, that makes me wonder, do pluggers have tails? Have we ever seen one? I can’t decide if it’s more unnerving if they do or if they don’t, and that worries me.” –Zaq

“Is Ziggy a plugger? Let’s examine the evidence. Evidence for Ziggy being a plugger: He is poor; he is a hideous mutant human thing; his life is an endless string of disappointments and depression; he is constantly being reminded of his depressing life by members of the service industry. Evidence against: He appears interested in traveling outside the United States, unlike pluggers, whose international experience consists of yelling drunken racial slurs at Travel Channel ads.” –Ms.X

“Has Tommie become so jaded from living with Margo that one drunken woman swearing is something to smile about? ‘Wow, she only used one of the f words on me.'” –Rainbird

“Has anyone considered that maybe Ziggy doesn’t need pants?” –Sequitur

“Does it strike anyone else that Ziggy frequently visits his travel agent, yet is never actually depicted traveling anywhere? I have a feeling this is yet another one of Z’s touchingly pitiful strategies to get women to talk to him. The travel agent — for some reason wearing a nurse’s uniform — is well aware of this situation. Ziggy comes in three, four times a week. Sometimes he just takes a handful of pamphlets, mumbles something inaudible, and shuffles out the door, red-faced. You can see how embarrassed they both are. They’re not even coming close to making eye contact. The travel agent, however, is bound by professional duty to at least pretend to be cheerful, but Ziggy’s solemn expression speaks volumes about the grim reality of this incident.” –Joe Blevins

“Oh, so Borneo isn’t good enough for you, Ziggy? So it’s little more than a punchline for a lame joke? As somebody whose family hails from and is based in that region, I have to say that I am deeply — wait a minute, have I just been offended by a goddamn Ziggy strip? Jesus Christ.” –Muddtallica

“As a midget with a freakishly large nose, Ziggy likely wears no pants in order to force the world to acknowledge him as a sexual being.” –ThaGeeGee

“You know, the more everyone keeps mentioning it, the clearer it becomes: this is a kidnapping storyline in A3G, which is fantastic, because kidnapping storylines in A3G can only end in discounted zipper-bound merchandise! I’ll get my credit card.” –Black Drazon

“Tommie seems to have developed a serious case of happyfaceitis in her ear in panel 2. Eventually it will become its own head, and Margo will teach it to belittle Tommie when she’s too busy to bother.” –kt

“Adrift in the wake of his father’s abandonment, young Gunther found solace in the sturdy regularity of the Cartesian coordinate system. Eventually, he swore, his whole body would be covered in comforting grid lines that could never ever leave him.” –One-eyed Wolfdog

“We need a dotted-line path showing Thel’s route of cleaning every room, disposing of Barfy-poo, scrambling through the laundry to find something presentable to wear, spraying air freshener throughout the house and on her unshowered body, etc., all culminating at the doorstep, so that her humiliation would be complete. Then next week’s strip showing the path of that neighborhood kid as he meanders around the back yard, avoiding the four unmarked graves, would be more deeply meaningful.” –seismic-2

“Beetle Bailey has achieved some sort of high-water mark for topical relevance this week. In addition to finally acknowledging the fuller geo-political implications of U.S. military service, they also note that it’s April. And it actually is April!” –Lorne

“FC Mom is not cleaning up — she’s trashing the place. She’s not taking any chances that today might be the day Children’s Family Services comes to visit and takes the little monsters away.” –Rachel211

“I find myself concerned for ‘the girls in Hawaii’ — given that the point of military training exercises is to learn how to kill other people without being killed yourself, in challenging terrain. Notice, too, that Plato is dressed like one of those hula dancers — clearly he’s envisioning a covert ops type mission, wherein he infiltrates the local hula school before blasting everything in sight.” –Rana

“Killer with his bongos is anticipating an invitation to join the Buena Vista Social Club once he gets to Cuba. Which, given that he’s in his 70s by now, would be just the gig for him.” –Beatrice

“When the plot of Mary Worth begins to remind you of a David Mamet script (House of Games), it’s time to up the drinking.” –Dingo

“Look at Ted Confey. That’s the way you do it. He gets his money for nothing and his chicks for free.” –Chicago Bob

Those who put money in my tip jar are more beautiful and pure than the noblest unicorns! And our advertisers are not too shabby themselves: