Hey, kids! Remember the Jungle Patrol? This exciting Bangallan law enforcement agency featured into a Phantom storyline from year and change back, in which a lady cop and and waitress shook up that formerly all-male bastion by combining toughness, trigger-happiness, and lady parts. The story lasted long enough to prompt some t-shirtage, then faded into that narrative netherworld where all Phantom storylines go, presumably never to be heard from again.

Except! Today we do hear from these ladies again, as they prepare for another day of imposing law and order on the jungle, by way of patrolling. This reappearance of pre-existing non-Phantom, non-Phantom-relative, non-Guran-or-Old-Man-Mozz characters has pretty much blown my mind, so, sap that I am, I’m actually pretty eager to find out where this is going. Suggestion: the just-concluded-rather-abruptly storyline involved a sexy lady sea captain who seemed determined to make the Ghost Who Flirts her own, despite his married status, and the last Jungle Patrol storyline concluded by having our two feminist pioneers celebrate their empowerment by plotting dreamily to woo their Unknown Commander, so perhaps a four-or-more-way catfight is in our future. 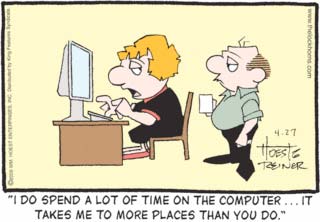 It’s true that I failed to acknowledge Joe’s hilarious umbrella-bludgeoning at the hands of Margo over the past few days; that’s because my job is to comment on the unusual and unexpected, and surely we all knew that when any blunt object is placed in Margo’s hands, a savage beating can’t be far off. On the other hand, who could have predicted that Joe’s ritual humiliation would reach its climax when some character that nobody recognized wandered in and offered to taser him? It’s these little moments of delight that keep us coming back to the comics page day after day.