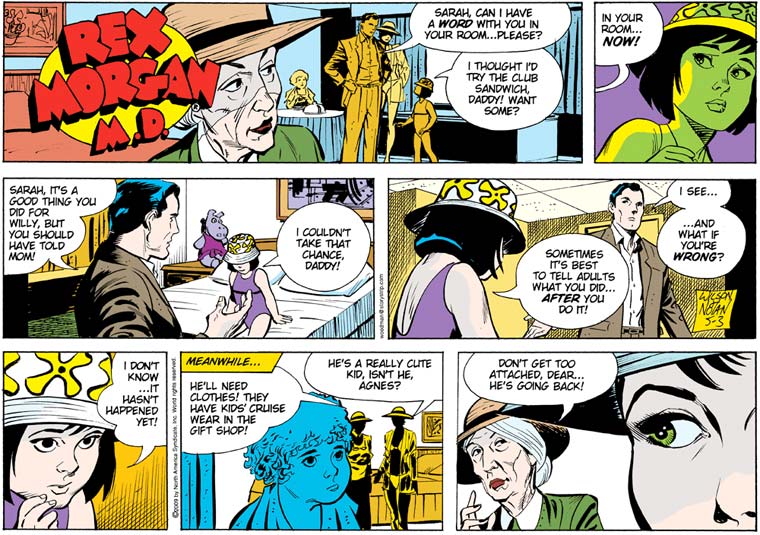 I lost interest in this storyline right around the time that my hopes that it would just devolve into all-out gay porn were dashed. However, today’s strip is worth noting for two bits of unusual self-awareness. First, Sarah and Rex have an uncomfortable moment when they finally admit what everyone else knows: that she’s the smartest character in the strip, other than, of course, Abbey the Wonderdog. More important, though, is Mrs. Dunsmore’s insistence that Willy is “going back.” No, she isn’t talking about deporting the little kid back to Panama; rather, she means that he’ll end up in the narrative purgatory where all the folks who have supposedly come to mean so much to the Morgan clan over the course of their adventures — Nikki, Nikki’s meth-addled mom, Hugh the histrionic heir, sexy homeless grad student Buck, and, of course, Abbey the Wonderdog — end up once the self-absorbed doctor and his family lose interest in them.

Everyone who’s suffering from the recession, take heart! It appears that the freezing of worldwide credit markets and the subsequent economic collapse were engineered by some cruel supervillain (or the cruel God of Finance, whatever) specifically to make Funky’s life miserable. Doesn’t that sort of make it all worth it?