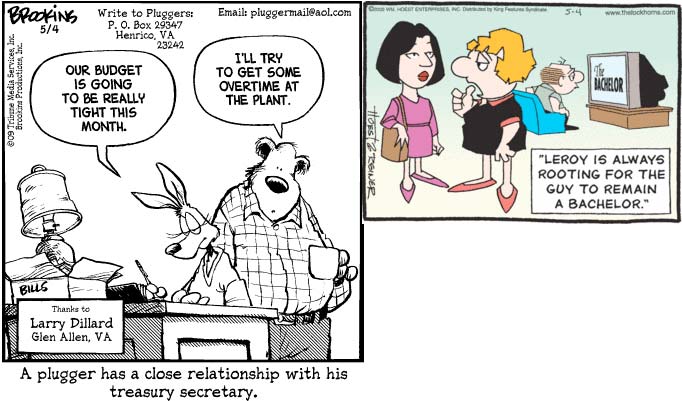 Some might say I’m being inconsistent for constantly complaining about comics but then complaining when they change anything. But I only complain when those changes are pointless, or actively make things worse. Take today’s Pluggers, for instance. I generally assume that most comics artists have by this point taken advantage of services that will turn your handwriting into a perfectly good font that you can drop into your word balloons with Photoshop or whatever; and though you may assume that Pluggers would shun this modern trend, I’m guessing they’ve been doing it for quite some time — check out the lower-case Gs in the caption, for instance, and you’ll notice they’re all identical. In today’s Pluggers, however, something appears to have gone awry, with the dialogue balloon lettering being all boldy and in a different typeface from the usual (and quite pleasant) font that the other lettering in the panel uses. Either it’s a misguided experiment, or someone hit a wrong button and put the wrong font in, then said “Aw, it’s Pluggers, who cares” and sent it off to the publisher. At least it’s not Comic Sans.

Meanwhile, the Lockhorns has moved on from it usual caption underneath the panel and caption just along the bottom edge of the panel techniques to experiment with a radical “caption inside a box inside the panel” system. I’m not sure if this is just an attempt to cover up the yawning empty space underneath Leroy’s chair or a fumbling evolution towards true word balloons. I’d actually like to believe that this isn’t what Loretta is saying, but rather is information given to us by some omniscient narrator; Loretta is actually busy explaining to some dead-eyed paid assassin how much she’ll pay to have Leroy murdered, or perhaps is sticking her thumb down her throat to induce vomiting, just so she can briefly feel something.

I look forward to seeing Dagwood devolve into wholly justified paranoia as he comes to learn that everything that happens in his universe revolves around him, and that there are always millions upon millions of eyes on him at all times, watching and judging, even in his most private, secret moments (i.e., bath time).

It is a convention in Shoe that relatively mild punchlines are met with expressions of goggle-eyed horror by whatever character is unfortunate enough to be present when the daily pun or joke-like final sentence is delivered; still, I like to imagine that something has happened that truly justifies these terrified reactions. For instance, perhaps Skyler here thinks that by “notes” his uncle is referring to Lotus Notes, the worst Internet communications suite ever created. 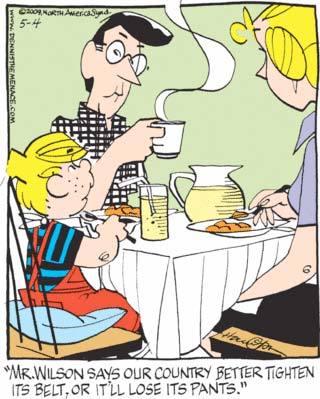 I’m not sure what Henry’s expression of thoughtful chewing is supposed to denote. Perhaps he thinks that America ought to listen to its wise elders and get back to the common-sense economic principles that made it great. On the other hand, he may just be concerned that his elderly neighbor is talking to his son about not wearing pants.

IN OTHER NEWS: I have tried to be nice, and reason with you all, but I am done with that. Discussing Mallard Fillmore in the comments only pisses everyone off and contributes nothing. Anyone doing so will be banned on the first offense I catch, starting now.