Oh, look, it’s another Milford team failing to win a title! Yes, there’s been a championship basketball game going on while the red-hot fisticuffs happen elsewhere. The Mudlarks losing again is of course utterly unremarkable at this point — presumably the whole loss exists just to set up the drama of faithless Cassie being shunned by her teammates for abandoning them — but today’s strip manages to offer an intriguing counterpoint to the concept of the uncanny valley — the slopes of the uncanny mountain, perhaps? Panel one disturbs and unsettles with the absence of details on the crowd in the background, as it appears that a tribe of identically black-garbed faceless, hairless automata have shown up to cheer on either Milford or Tilden; but panel three shows us that more detail isn’t necessarily any better, as we are confronted with more of Marty Moon than we ever wanted — the shine of his greasy goatee, the hollowness of his cheekbones, his glassy eyes, each and every one of his molars. We can practically smell his breath (Mr. Boston gin mingled with coffee from the AM/PM, not quite masked by the cloud of Axe Body Spray that hovers around him at all times). 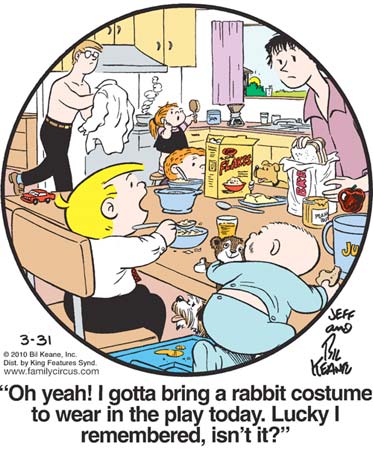 Ha ha, yes, this is a cartoon about how having four kids and a husband who doesn’t know how to iron would lead any woman to murder, but the thing I find most interesting is the fact that Billy is apparently dressed in a nice shirt and tie, for some reason. Perhaps Mommy can fashion Big Daddy Keane’s mushy, vaguely bunny-fur-like shirt into a makeshift rabbit costume and send him to school in it, and neatly dressed Billy can go into the office. Both problems solved, and we can move on to the question of why Dolly is attempting to brush her hair into the soup.

It appears that Jamaal hasn’t quite gotten this “cruising for anonymous gay sex” thing down yet.