Sunday’s Blondie as a whole, in which Dagwood chases (or is chased by?) a tiny owl that may or may not be a figment of his imagination through his own house is itself a worthwhile bit of fine entertaining madness. Still, I have to say that the two throwaway panels on their own constitute a delightfully weird bit of art that deserves to be showcased in isolation. Dagwood’s just trotting along, presumably from the couch to the refrigerator, or from bed to the bath, hands in pockets, when he gets WHOO’d at. I love that his immediate reaction is not fear or panic at this unfamiliar sound, but just a mere and casual “what?” as if he could work this whole thing out if only he could hear it better. 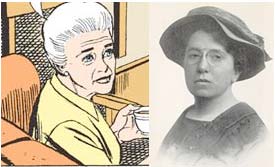 If it turns out that all of Mary’s seemingly petty meddling has been part of a long-term plan to further the cause of anarcho-syndicalist revolution, I for one will be very impressed.