And so the Mike Manley era begins in Judge Parker! I think we are all looking forward to seeing his work, and he’s got some big shoes to fill. It looks like he’s beginning with a pretty Barreto-esque style, which is natural for a transition, but I hope in the coming months he makes the strip his own, as his predecessor did. My only real complaint is the font in the dialogue balloons — I’m virtually certain that every font on the comics page these days is computer-generated rather than hand-lettered, but this one looks a bit more obvious that I’d like (though, hey, at least it’s not Comic Sans). I do note with some amusement that Sam seems to have the slim, willowy hands of a young Ted Forth. 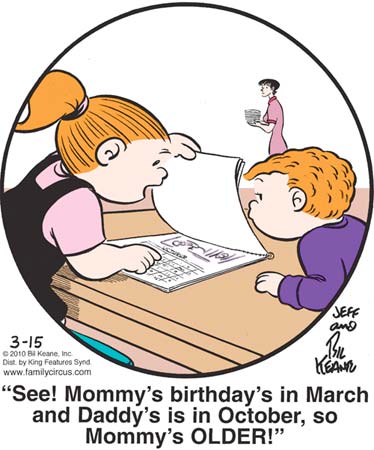 I’m sure the intended joke here is that the little melonheads don’t really understand how time and the calendaring process works. Obviously Daddy is supposed to be older than Mommy, as this is the natural order of things, what with Adam having been older than Eve and all. Still, since, the occasional birthday notwithstanding, the Keanes all live in some kind of endless, eternal present. They never age, but the seasons do change (and therefore the months must advance). Is there really any other way to determine age, then, other than location within the only calendar they’ll ever need?

Ha ha, Beetle prefers the finger to the fist! Seriously, most days this stuff just kind of writes itself.