Your COTW in a moment, but first: surely you recall this charming COTW runner up from last week:

“Someone really ought to paint panel 1 of Bobbie and Margo on the ceiling of the Sistine Chapel. They can just paint over whatever’s there now.” –monsieurjohn 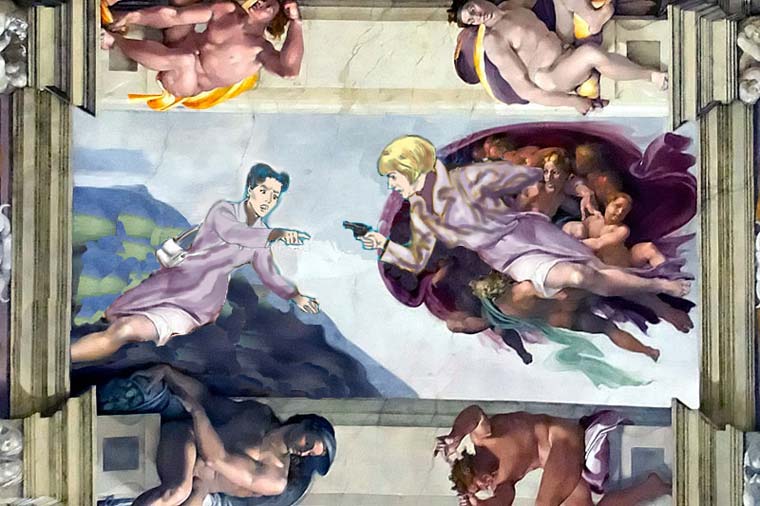 And now, on to the business of the day — the COMMENT OF THE WEEK!

“That look on Sam’s face could be ‘Oh, that’s the guy who’s been nailing my little girl,’ but I prefer to think it’s, ‘A cart? And here I’ve always carried my baggage like a schmo.'” –gleeb

And your funny runners up:

“Don’t listen to her Bobbie! You put that gun down, she will swallow you whole! Like a snake!” –Rantingdude

“Clearly, Billy has decided to start a sandwich collection, and is disappointed to receive one he already has. It’s just like Pokemon cards, only his parents don’t think bread is the work of Satan.” –Andrusi

“The Magee household must have a hell of a thing to witness back in the day since two members of the family ask, ‘What’s going on?’ instead of ‘What’s with the gun?'” –skullcrusherjones

“Billy requires two sandwiches because of the extra stomach in his head.” –Rhekarid

“I love the POV of Gil Thorp’s panel 3. Now we know what the world looks like to Kaz’s left forearm! Hopefully they remember to turn the KazKam off before he hits the men’s room to drain all those lite beers.” –Krazy Kat

“With regard to ‘stepmother,’ I believe the term you’re looking for is ‘evil stepmother.'” –MKH, on the proper description for Bobbie’s relationship to Margo

“It is definitely a mistake to think that Ziggy has ever been within a mile of anything hip enough to be in UrbanDictionary. He’s referring to jacks, which he plays, like the game of life, badly and alone.” –MsMolly

“Last time we saw Mark he was in the lake with an overturned canoe after the hairy dudes took a shot at him. Now he is dry, with perfect hair and immaculately ironed clothes. Just more proof Mark is actually made out of plastic. You can also see this because his lips never move. Poor Cherry, I think she thought being married to a tall plastic pillar would be more fun.” –nerowolfgal

“Wow, I never noticed that poor Puddles never made it out of the old Evans drawing style. Puddles is some sort of sad, flabbily drawn, vestigial creature. Whoa … I felt a moment of compassion for him until I remembered that whole Puddles-centric Christmas adventure, where Puddles had thought balloons for what seemed like weeks on end, and romanced some sort of poodley girl dog, and ended up hangin’ with Santa. Fuck you, Puddles.” –Spotted HØrse, Jungle Steed

“Are there actually pluggers in Eugene, Oregon? Or is this ‘Glen Wolfram’ a U of O elitist who said to himself, ‘I dunno, Pluggers something something overeating. Hey, a writing credit’s a writing credit.'” –Artist formerly known as Ben

“The New York Campaign for Cruelty-free Food hung those banners, and ‘Free Pizza!’ is an imperative sentence, calling on the good people of New York to line up, march into Montoni’s, and take action in the name of good pizza. Each misbegotten crime against gastronomy, secured in a well-insulated pizza box, is quietly carried out to the dumpster and compassionately euthanized. Inside the crime scene, or ‘restaurant’, each rescuer is permitted to punch Funky or Les in the face.” –Walker of Dog

“The safeword is ‘Rosebud’ because it’s the last thing you’ll say before you die.” –The TJ