Oh, Funky Winkerbean, I’m glad you’ve finally decided to give in and just embrace emotional devastation as the engine for all your drama. Today’s strip, both in form and in content, could be the basis for some bleak avant-garde art film that would play tiny, pretentious cinemas in New York and LA for two weeks before being released in a Criterion Collection DVD. For those of you not familiar with all the ins and outs of the strip’s depressing backstory: the brown-haired lady who is attempting to bust in on Les’s budding sexless romance with Cayla is Susan, who, pre-time-jump, was one of Les’s students who developed a crush on him for some incomprehensible reason, and who tried to kill herself (the incident depicted in the second panel) when her advances were spurned. Thus, what we have here is pretty much “mild low-level flirting mild low-level flirting INTRUSIVE SHARED BUT UNSPOKEN MEMORIES OF HORROR mild low-level flirting,” which is pretty hardcore. The kicker, for me, is the panel two’s “sepia-toned photo in an old-timey album” motif, which serves as a visual cue for flashbacks in the Funkyverse. In this case, it colors a grim, painful moment with a sort of ghastly nostalgia, as if Susan and Les will be laughing about it in retrospect after the consummate their mopey love.

Also, I know that the time jump wasn’t supposed to move us a decade forward in absolute time, but I’m not sure which prospect I find more unsettling: that big shoulder pads will be back in style for ladies by 2020, or that they’re coming back into style now. 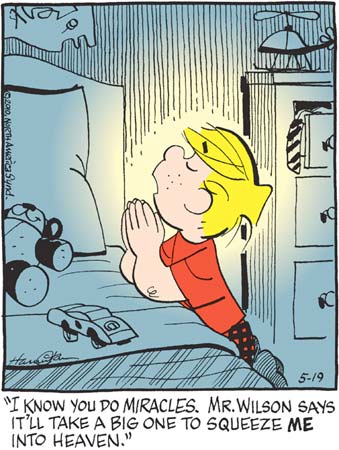 Since I basically just egged Funky Winkerbean on to whatever Grand Guignol emotional excesses it might dare to achieve, I guess it’s OK for me to express my disappointment that we’ve missed Mr. Wilson’s loving descriptions of all the tortures Dennis the Menace’s damned soul will be experiencing, in hell.