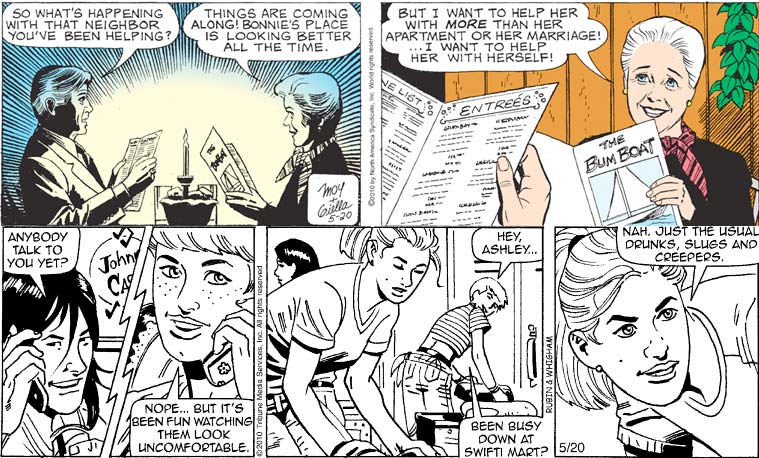 A pair of truly nightmare-fueling visages in today’s comics! Dr. Jeff has chosen exactly the wrong evening to come out of his hidey-hole and once again eat thawed-out halibut with his paramour, as Mary is clearly in the throes of a meddling binge. Eyes the size of dinner plates, she rapturously details her intention to not only “help” poor Bonnie with her problems, but to change the woman’s very essence so that it’s more in line with what Mary expects and demands from a human who’s fallen haplessly into her orbit. Jeff almost looks taken aback in the first panel as he takes in Mary’s meddle-glow. I thought that my sacrifice was enough, he thinks. I thought that by submitting to her requirements, I would keep the rest of humanity safe. But now I see that she’ll never be satisfied.

Meanwhile, in Gil Thorp, country star/weirdo Slim Chance is giving Cassie advice on undoing the pariah status she earned by scheduling an abortive elopement the day her basketball team was playing its Big Game. Said advice seems to have mostly consisted of “Be nice to the girls who hate you with good reason,” and today we see it’s finally worked — with Ashley Aiello, last seen as a wrongly accused suspect in the great Nutboy caper. Ashley went through her own social trials in the wake of that incident, if I’m remembering correctly, and the way her head swivels raptor-like towards the sound of her name in the final panel is frankly creeping me out. “POSSIBLE FRIEND?” she thinks, her eyes lighting up like high-powered laser beams.

It’s sad when Pluggers can’t even master something simple, like the rhythms of how ordinary down-home Americans (or freakish man-animals, in this case) actually talk. It’s the lack of a contraction, “you will” instead of “you’ll”, that’s really setting me off; it sounds to me like nothing so much as a line that would be delivered by some stereotypical Jewish pawn broker in a movie made in the ’30s. This may be a defense mechanism, though: perhaps my inability to hear “will” as anything other than “vill” is preventing me from seeing the stilted sentence construction as an exaggerated faux-courtly pass, which will in short order lead to plugger-on-plugger coupling, right there on the hair-strewn linoleum.