Whoah, this plot is only in its infancy and already it’s going completely off the rails. Mary, refusing believe that anyone might not want to be heteronormally coupled up for all time forever, thrusts an accusing finger directly into Dr. Roberts’s non-loving face. The good doctor, a highly trained psychologist, knows a complete lunatic when he sees one, and has decided that his only hope is to feign insanity himself; he launches into a series of obsessive-compulsive tics, rubbing the back of his head and patting his chest while dancing aimlessly around the room, hoping that Mary will be terrified enough to flee. Ha ha, doctor, it’ll take more than that to shake her off!

I’m not ashamed to admit that I find this newfound friendship just a little bit heartwarming, which makes sense because I’ve come to loathe all the main characters in Luann so much that I feel quite affectionate towards the ancillary characters whose main job is to irritate the DeGroots et al. Still, I’m a little unsettled to learn that TJ, who’s supposed to be, what, 23? 24?, considers 15 to be the entry level of his dating range.

And finally, I send you off on your weekend with a full-sized dose of Rusty-horror! 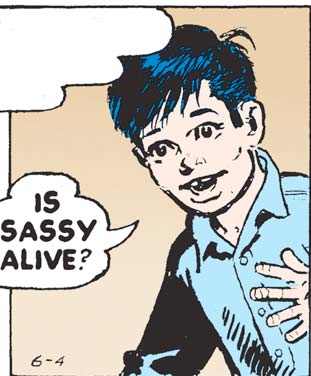 Ha ha, try looking at those freakishly wide eyes and those stubby fingers and not getting the heebie-jeebies!