Oh, hey, look, it’s Gil Thorp, where the alt-country star/weirdo/pitching sensation just tried to bean that jerky rich kid from the NutBoy storyline during practice, because said jerky kid has been picking on said alt-country star’s bandmate. Please don’t ask me to explain in more detail or look up their names, as just typing that sentence caused me to start to twitch; today I’m mostly interested in how the team is taking sides in this epic battle. Robb has shown his hatred of bullying and injustice before, assuming that guy from last summer’s storyline is the same Robb; they don’t appear to look anything alike, but this is Gil Thorp, so that doesn’t mean anything, and how many guys named “Robb” can there be, really. Most fascinating is Team Blaine and Not-Blaine in panel three. Who are these mysterious, handsome young men? Why do they value in-group loyalty over social peace in the larger polity? Did they confer on this point before Not-Blaine spoke for both of them, or are their opinions so in tune that they didn’t feel such consultation was necessary? I look forward to none of these questions being answered, ever, but I’ll always remember the day they looked creepily at the reader and mouthed awkwardly written dialogue to move the plot along. 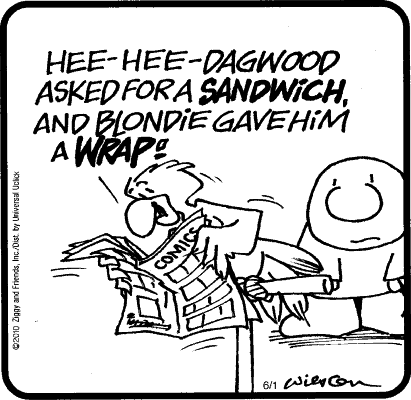 Did you know that the parrot in Ziggy is named Josh? I have managed to avoid commenting on this shameful fact over nearly six years of comics blogging, but now that the damn bird is apparently trying to muscle in on my territory, I feel compelled to speak out. Hey, parrot, you appear to be shaking! You’d better be shaking in fear, because comics-mocking is my schtick, got it? There’s only one way a bird ought to be commenting on any printed matter, and that is by defecating on it.

(Hey, wouldn’t it be funny if Dagwood were confronted with a wrap, though? He’d presumably be baffled by any foodstuff introduced to mainstream American palates after 1945. Ha ha! Dagwood eating a wrOH GOD OH GOD DON’T LET THE BIRD GET TO YOU JOSH HOLD YOURSELF TOGETHER)

Aw, look, Mary has fixed the hell out of Bonnie and Ernie’s marriage, to the extent that they’re just going to start rutting right there in the hospital waiting room. How sweet! This handsome but obviously lovelorn doctor is so enchanted by Mary’s success that he’s found himself unwittingly falling into her gravity well.