So I’m in the midst of a minor fixation on the geography of the Crock universe, which I dearly hope passes soon. But, while I’m being tortured with it, I may as well share it with you! Today’s baffling segment of physical space is what I assume to be the command center of Crock’s Legionnaire post. This appears to be a vast, unadorned concrete chamber; its only contents are work areas for Crock and his adjutant, which are separated by a good twenty feet of emptiness. The exterior of the fort appears primitive, so I’m assuming this windowless chamber isn’t air conditioned; therefore, we must assume that Crock and Poulet spend their days shouting at each other through the thick, unspeakably hot air, their words echoing off the bare walls. Thus, the fort’s architecture duplicates — and perhaps exacerbates — the brutality of the colonial regime that it houses and represents. 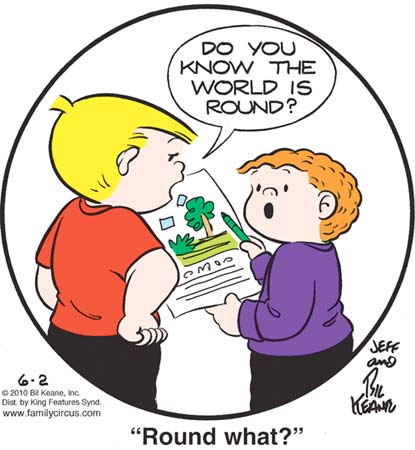 Uh oh, it looks like Billy’s managed to somehow get a hold of some off-Kompound knowledge, possibly from one of the devil’s own “books”! It’s totally in character for the Keane eldest to use some hard-won nugget of information to prove his superiority over his little brother, but his use of it here is weirdly contextless. Wouldn’t it be easier to make Jeffy feel stupid by pointing out that his attempts to color on a piece of paper that isn’t laid on a surface are doomed to failure? As it is, Jeffy is given an opportunity to offer up one of his trademarked defiantly ignorant comebacks.

Her work with Bonnie and Ernie complete, Mary has decided to jump right into another meddle without even the rest-period denoted by a pool party. This is a physically demanding choice — you can see that she’s checking her pulse to make sure that her body can handle it — but she’s highly motivated to reach a new pinnacle of her craft.

Pluggers have no friends. The people pluggers think are their friends are just those acquaintances too polite to abruptly break off conversations and walk away, no matter how much they want to. Once these people have managed to extract themselves from a plugger’s awkward grip, any promises of future social interaction that were offered up in order to smooth their exit are immediately forgotten.