So I’ve been getting lots of emails that boil down to “OMG WHY AREN’T YOU TALKING ABOUT FUNKY WINKERBEAN???” Well, because the strip is still methodically setting up whatever narratively interesting and sure-to-be-depressing plot will follow from Funky’s near-death (or possibly actual death) experience, in ways that don’t really lend themselves to humorous commentary. But, for those who simply must hear my take, it appears that we’re either going to get a glimpse of a world in which Funky never existed (i.e., It’s A Funkerful Life) or some kind of time travel plot (in either the Funky Sue Got Married or Funk To The Future variants). I promise to come back to this the next time the strip is interesting, which may be tomorrow, or never.

Meanwhile, to punish you for your pushiness, I will show you a Mark Trail villain talking dirty. 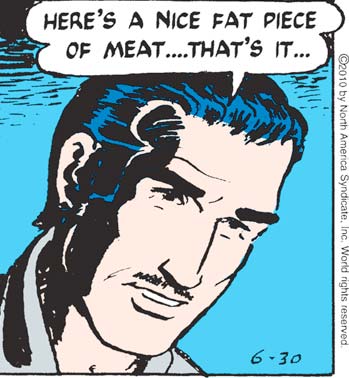 I hope you’ve learned your lesson! 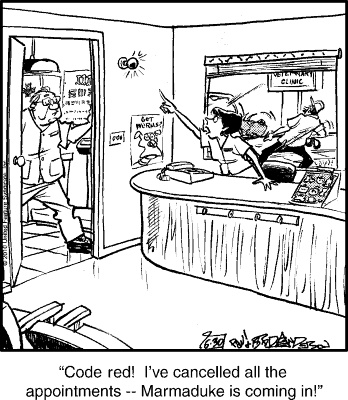 This is very thoughtful of the vet tech! It would be quite harrowing for anyone else with an appointment today to bring their pets in to the vet, only to stumble on to the scene of unspeakable carnage that Marmaduke will inevitably leave in his wake.