Your COTW coming momentarily, but first: an EXTREMELY IMPORTANT ITEM (for Baltimore-area folks)! If you are from around Baltimore and are cool, you are already WELL AWARE of Fluid Movement, the local community performance art group that puts on water ballets, roller shows, and other awesome performances and shenanigans. You may even be aware that this summer’s water ballet, Jason and the Aquanauts: 20,000 Legs Over The Sea is a take on the Greek mythos of yore, and on the Ray Harryhausen films of slightly less yore: 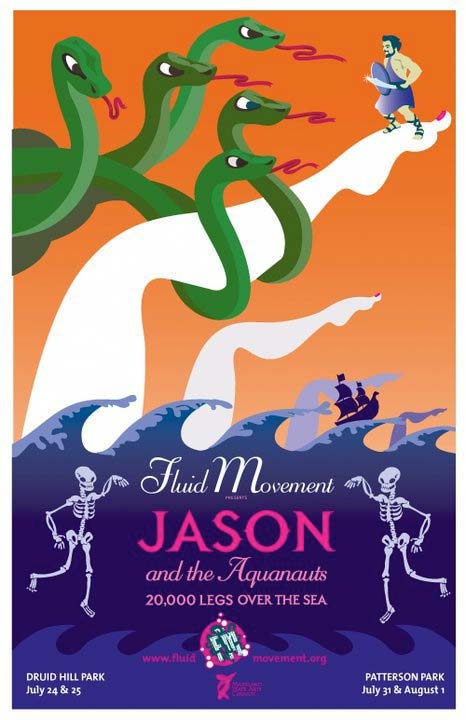 What you may not be aware of is that this performance will feature me! My lovely wife Amber is a longtime member of the group and currently the president of its board, and has been trying for some time to get me involved in one of their productions, but only this year has a role suitable for my majesty been found: That of Zeus, king of the gods himself! 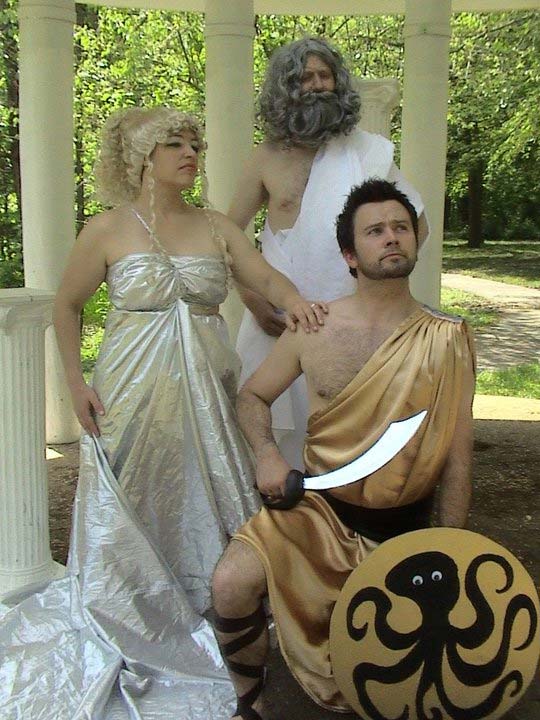 That is Amber as my consort Hera, and this guy Victor who you probably don’t know (but who is very funny) as Jason. The shows are at Baltimore’s Druid Hill Park pool on Saturday July 24th (at 3 and 5 pm) and Sunday July 25th (at 5 and 7 pm), and at Baltimore’s Patterson Park pool on Saturday July 31st (at 5:30 pm) and Sunday August 1st (at 5 and 7 pm). The show on the 31st is our benefit show, so tickets are a bit more expensive, but there’s a party afterward with food included in your ticket price, plus you get to swim in the pool with the performers after the show! Read more on the Fluid Movement Website or buy tickets at Brown Paper Tickets for the Druid Hill Park or Patterson Park shows!

OK, so you’re going off to buy your tickets now, right? I’ll wait for you to get back … good. Now, as your reward, here is your comment of the week!

“Jeffy Keane is pretty menacing … how many times have we seen his ass in the last six months? Too many, that’s how many.” –Binder’s Butter Beans

“I like the fact that Mark Trail’s phone didn’t even ring. Clearly there’s no one on the other end; it’s just a prop he carries to end conversations that lack punching.” –JD

“This week has been amazing. At the end of the each strip I’m so surprised I yell several catchphrases at once, usually GUUURRRL, OH NO YOU DIN’T, and MARGO IS GOING TO FUCKING KILL YOUR ASS. That last one isn’t a catchphrase yet, but it will be. Oh yes.” –Sheila Sternwell

“What pretensions is Funky talking about? Is he saying od’ing in the toilet is putting on airs?” –killercoconut

“The second panel is awesome! We are watching Jenna from the same vantage as Mary is watching — from the videocam hidden in the pink flowers.” –Flying Manatee

“Mark needs a landline because his plan is to follow the actual telephone wires to the ‘stachioed Sassy napper.” –Sans Sense

“Today’s Pluggers is just reminding us that anthropomorphic dogs, rhinos, and chickens prefer it doggie style. It is painfully obvious. And by painful I mean the sensation of dry heaving while clawing your eyes out at the thought of plugger sex.” –Thomas B.

“Mark’s insistence upon using outdated technology with modern-technology terms is actually part of an elaborate money-laundering scheme to process the profits from the twisted genetic experiments that spat out Rusty. ‘Memory card’ is actually a coded message indicating they’ve received another order for a vaguely boy-shaped abomination.” –Chowder

“What, the motel doesn’t have a fax machine?” –Red Greenback

“Even without treatment, you could serve two more terms as mayor. By the way, did you ever see Weekend at Bernie’s?” –seismic-2

“The Dick Tracy Stand Up Routine! Finally! ‘I just flew in from Los Angeles, and boy are the guys I beat up on the plane tired! Ha-ha! But seriously folks, they’re both dead, along with everyone else on that plane.'” –Black Drazon

“Wait, animals don’t have human emotions? What about all those pluggers? I’ve never seen so many bears, dogs, birds and other beasts so full of self-loathing and crushed dreams.” –McManx

“Do not attribute human emotions to wild creatures. For instance, these sea gulls are not actually ogling the attractive woman in a bikini. They merely see her soft, juicy eyeballs as an easy meal.” –Perky Bird

“Hmm, I just tried, with my primitive Photoshopping abilities, to ‘turn Funky’s frown upside down’ as they say, just to see if the strip’d work better. All I know is that it’s like some hellish Venn diagram intersection of ‘drunk’, ‘lecherous’ and ‘stroke victim’ and I intend to never, ever try it again.” –JamesMurton

“You know, I always wanted to be a doctor and have a Halloween-colored office with a twin bed pointed directly at my hunter green executive desk chair, a DVD player sitting on a bookshelf next to a dead plant, and my very own torchiere lamp! After spending so much time in medical school, I’d have no time to learn about interior design or cell phone technology from 1998, either.” –Patrick

“Of somewhat greater concern is the growing phenomenon of women becoming smitten by men in orange suits. It happened to Miss Cory, and she was successively bilked out of $50,000 by one swain and had to watch the next attempt to escape her clutches by dying. Then, Mrs. Roberta Merrill Magee took up with an orange-suited psychologist and was sent away ‘upstate.’ We would suggest to Miss Thompson that her affections are skating on dangerously thin ice.” –Fashion Police

There were also three comments that were too long for COTW consideration, but still worthy of your attention: gnome de blog’s contemplation of the effect on Funky’s future wives of their encounter with his grim, spectral presence; Ned Ryerson’s beat poetry version of Funky’s depressed, paranoid ramblings; and Perfesser Wut’s Snappy Answers to Stupid Question, Mary’s Interrogation Of Mike edition.

Big thanks to everyone who put cash in my tip jar! And here’s where we could be giving thanks to advertisers like you! To find out more about how you could be thanked in this spot, and more about sponsoring this site’s RSS feed, click here.