Oh, look, it’s two kids named after gated housing developments who are bratty and so notorious that Gil’s heard of them both! This addition of irritating, privileged WASP teens is probably Gil Thorp’s misguided attempt to cash in on Gossip Girl fever, several months after it faded.

Oh, man, this A3G storyline is determined to keep bringing us new delights, isn’t it? The best part about today is how quickly Tommie has switched allegiances to the latest mean girl to come on the scene and tell her what to do. Forget you, Margo, it’s all about Kat now! Oh, God, we can’t keep Kat waiting! I’ve put on my robin’s-egg-blue sweatshirt, do you think it’s ugly enough? Will Kat think it’s ugly enough?

That’s right, ladies: when a man doesn’t call you after a date, it’s probably because he can’t deal with how intense his feelings for you are. It’s all detailed in my new dating advice book, He’s Just Into You So Very, Very Much That He Doesn’t Know How To Express It. These sorts of plot developments explain why Mary Worth isn’t more widely read: it’s too raw, too real. 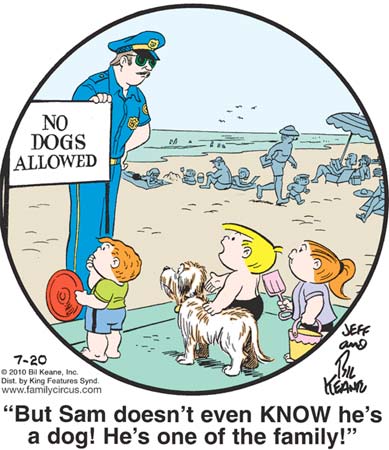 Billy, you don’t have to do what that man says! He’s obviously no police officer: He’s a stripper-cop, and he’s just a little lost as he looks for that oceanside bachelorette party he was hired to entertain.

“Or if he hears it from my wife, or one of the twelve other people I shot my mouth off to about it on my way into work today.”