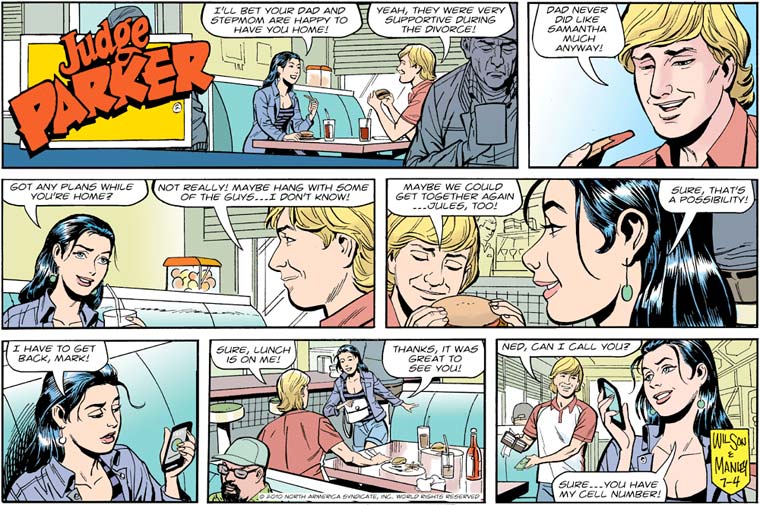 So it turns out that Neddy’s lunch date “Mark” was not her ex of “tongue thing” fame; that was “Bob,” proving that, for whatever his faults, Jules has at least helped break Ned’s addiction to guys with bland, WASPy names. Anyway, Mark, despite apparently being of collegiate age, has since parting with Ned gotten married and then divorced. I have to actually speak up in favor of the dialog in this strip: while soap strips are usually filled with awkward, unnatural speech, this installment is actually marked by the realistically awkward speech you’d hear when two exes with unresolved feelings get together. Mark’s final line is a nice touch. “Ned, uh, even though we discussed getting together in the near future, which would involve one of us calling the other, do I have permission to call you? Just making sure! I think about your body all the time! Uh, I mean, say hi to Jules for me!”

OK OK WE HAVE RESOLVED THE FORM OF TIME TRAVEL UNDER QUESTION HERE, which is that Funky’s fiftysomething body has been propelled back to his high school days. This raises another question, though. Tom Batuik has said that the chronological question raised by the strip’s time-jumping — that is, whether the recent jump shoved the cast into 2017 or what — doesn’t interest him, an attitude I have sympathy with! However, if that’s not a question the strip wants to grapple with, then adding a time-travel plot isn’t the way to avoid it. How old is Funky supposed to be, anyway? I said “fiftysomething” above because that’s how he looks to me, but all Westview inhabitants are prematurely aged by grief, so I’m not actually sure at this point. If he’s supposed to be, say, 45, then he’s back somewhere around 1980, I suppose. And I’m sorry, but this crowd is looking insufficiently outrageous for the tail end of the disco era. 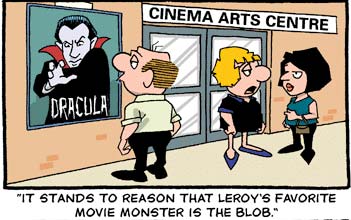 I enjoy the vaguely simian but still contemplative look Leroy is giving that poster here. “‘Dracula,’ eh? He looks scary enough, I suppose, but he’s no The Blob.”