There are few things in this life that I enjoy more than Mary Worth’s version of squalor. Some great previous examples include Mary’s journey past the Charterstone gates into the hellscape of “downtown,” Vera’s sad post-disinheritance apartment, and Wilbur’s not-son’s hilariously run-down hovel. But Lonnie and Fred’s crash pad is pretty great too, with its combination of decay (crumbling plaster, torn curtains) and disregard (picture askew; pink curtains, black wall, and baby blue chair placed in close proximity). And of course Fred carries this slovenliness over to his own person, with his wispy combover and unbuttoned, untucked shirt. (At least his undershirt is tucked it; he’s not a monster.)

The question is: what exactly is the relationship between Lonnie and Fred? I would actually be thrilled if they were a couple, because it would strike a blow against the stereotype that all gay men are classy and well dressed and have an innate interior design sense. Some of them just drink off-brand beer right from a can, a can that they set down on their hideous end table without using any kind of coaster.

What … what exactly is happening in panel three? Has Archie opened the door only to be killed by Leroy’s elaborate wind chime-based booby trap? Or is “He really enjoyed making wind chimes” the phrase that triggers his post-hypnotic suggestion? What we see is Archie’s own self-perception, as his consciousness falls down a rabbit hole of wind chime hallucinations; meanwhile, his body stands silently in the Lodges’ foyer, awaiting instructions to kill. 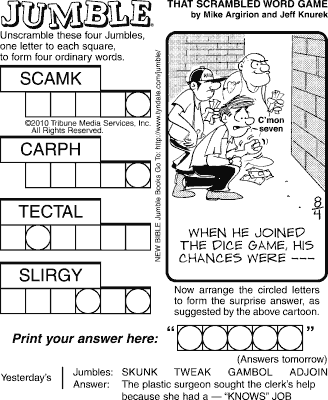 Wow, I’m pretty sure this is the only puzzle game in the newspaper that’s ever depicted a guy who may well be on the verge of being beaten to death in a dank alley somewhere. You don’t get this with Sudoku, kids!