Your comments of the week momentarily, but first: As I noted last week, this summer’s Gil Thorp storyline has been insultingly boring, not least because it has featured exactly zero instances of Coach Kaz being wacky. We weren’t even treated to another glimpse into his love dojo! Faithful reader Loramir provides some evidence of why this might be.

I confess, I’ve only read Gil Thorp this summer when you’ve posted it on the site, but apparently while Gil’s celebrating his success in bringing honesty back to golf, Coach Kaz has been hiring himself out again. Not, unfortunately, as a freelance badass — just as a yard man. 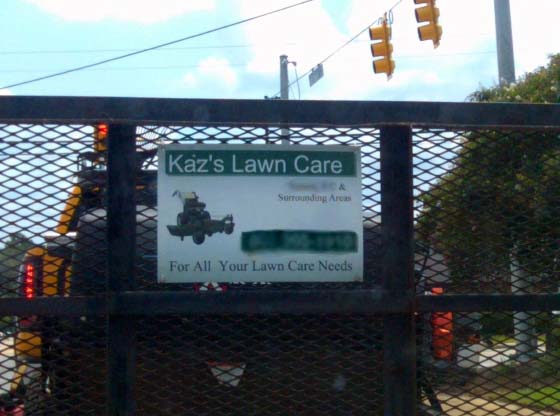 But we need to move on from this sadness and learn to love again, with help from the comment of the week!

“Is it me, or did the writer of A3G have an ‘oh shit’ moment when she was writing Mojo’s lines? ‘I’ve styled everyone from Beyonce…’ Oh crap, nobody in my target audience knows who that is! Uh … uh … ‘…to Helen Mirren.’ Saved it!” –Rumon

“I call foul. They aren’t enjoying a real frolic until they’ve shared a sandwich.” –seismic-2

“I think Mary Worth is teaching us an important lesson about the inevitable random cruelty of urban vigilante fashion police. There’s no excuse for what they’ve done, but seriously: don’t ever go out on the streets in a vest, kids.” –Revenge of Chesnut

“That’s a hell of a big piece that gangster is riding around with in his sweet two-door Dodge Aries K. It’s a good thing he has that ice chest riding shotgun to help steady his aim.” –Edgy DC

“I’m glad they added ‘college student’ into that plugger joke’s calculus because ‘A plugger’s idea of a balanced meal is eating three processed foods with slightly different flavors’ would have been just too hard to believe.” –Fanshawe

“I had previously assumed one became a plugger only through soul-crushing life experience. I find it uplifting to deduce through the existence of college-age pluggers that it is a hereditary trait, and therefore one which I can almost certainly never acquire.” –Tess

“There is no way that is not Rusty in a Marlo Thomas wig. Who’s that girl? It’s Rusty.” –Jester

“I must say, considering Dr. Mike’s earlier histrionics he’s taking his father’s revelations with an alarming nonchalance. ‘So your best friend was brutally murdered in front of your very eyes and you left mom and me to go on a bloodthirsty campaign of vigilante justice? Fascinating, please go on.'” –Paddy

“Say what you will about 9 Chickweed Lane and Mary Worth (and I usually do), but as far as I know, they have yet to stoop to using hair cutting as a major plot point.” –TheDiva

“My initial reaction was also to be kind of judgmental about Lu Ann’s pathological obsession with getting her hair cut and seeming belief that it’s the worst thing that could possibly happen to a person, but I guess if I had to wake up every day to the chilling cautionary example that is Tommie, I might get a little squirrely on the subject myself.” –Violet

“I can’t think of a decade old enough to put jury duty jokes into.” –Alex

“So in Shoe’s grotesque avian parody of the human world, you can still smoke cigars in drug stores but Preparation H is available by prescription only?” –Joe Blevins

“Panel 5 of Mary Worth: Best Comb-over Depiction in A Dramatic Role.” –zenvelo

“Sam Driver weight-tested women’s shoes. Neddie had lunch with … some guy. April went on a thrilling, high stakes mission for the CIA, probably involving a car chase, a shootout, and lots of cool explosions. There was only time to follow two of those three storylines. And the creators of Judge Parker stand by their decision. –4 8 15 16 23 42

“‘Exchange data’? We didn’t call it that in my unspecified period of time.” –Zaratustra

“When Herb says, ‘I hate the way this show typifies the way women gossip,’ his obtuse verbiage is actually a psychological defense that indicates he’s lying to himself. What he really means is, ‘I love Gossip Girl.’” –BigTed