Well, here’s a sentence that I never, ever thought I’d have reason to type: I learned some interesting stuff from Pluggers today! A “clip joint” apparently is a bar where patrons are lured in, sometimes by the promise of adult entertainment, sometimes by pretty ladies asking passersby to come party with them; generally speaking the ladies have a drink or two with the poor mark and then slip out, at which point the victim discovers that the drinks were hundreds of dollars apiece (should have asked before ordering, bud) and there are some large, burly men there to make sure that he pays. This scam is or was popular in the mostly plugger-free locales of London and New York. This delightful factoid about the world’s seedy underground has really made my day, so, thanks, Pluggers! I guess pluggers don’t get hustled into these establishments because it’s pretty obvious that they don’t have any money to steal.

Longtime Mark Trail readers know in their bones that something is off about Stepfather here, so the fact that he’s so blithe about letting his wife’s little girl keep a tick-ridden wild animal as a pet sets off warning signals that some deeper horror is in the offing. “Why are you here, Trail… is it about my fence? Are you worried that I’m building a giant hunting enclosure, and that I’m going to have some of my rich buddies come and shoot little Lucky here and leave him to bleed to death, right in front of this adorable little girl? Is that what this is about? Because I can’t confirm or deny that at this time.” 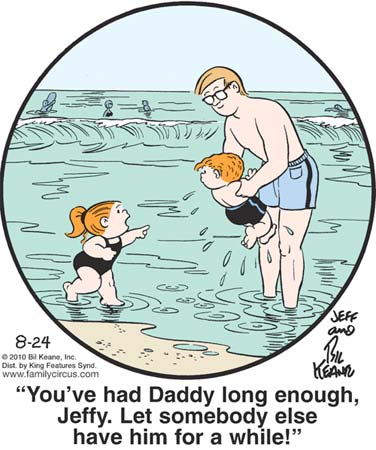 Big Daddy Keane is allowing himself a little smile because he now has another solid vote in favor of Operation Sell Jeffy, Or, If There Aren’t Any Takers, Just Give Him Away. All he needs is one more vote for a majority — and really, it shouldn’t be too hard to trick PJ into waving his little arm in the air at the right moment.