Does a bear make mischief in the woods?

It doesn’t surprise me to see this bear casually destroying a nice sign that a thoughtful forest ranger put up. Bears are a sinister menace who will stop at nothing to lure humans into feeding them … with human flesh. What does sadden me is to see that an innocent beaver has been roped into this tomfoolery. “Hey, beaver friend,” the bear probably said, “that sign says ‘Don’t feed the beavers!’ You don’t want that sign still standing by the riverside, do you?” Beavers are notoriously semi-literate; this beaver probably just saw that the last word started with ‘B’ and ended with ‘R’ and believed the bear’s lies, the poor trusting soul. At least he looks happy, doing the bear’s bidding. I hope the bear doesn’t eat him after this. 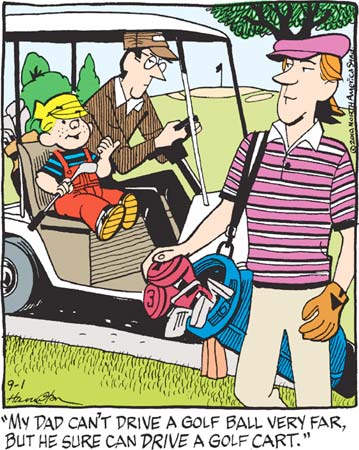 Dennis does occasionally do a bit of legit menacing, and my favorite type is when he humiliates his father in public. I like to think that today he’s been sitting on this gag until he spotted the preppiest, douchiest guy on the golf course to use as the agent for his father’s debasement. “My dad can’t drive a golf ball very far, and he also wears a brown sweater with black pants. That’s because he’s lower-middle class, and always will be, no matter how much money he makes! Did you know that he went to public schools — even for college?“