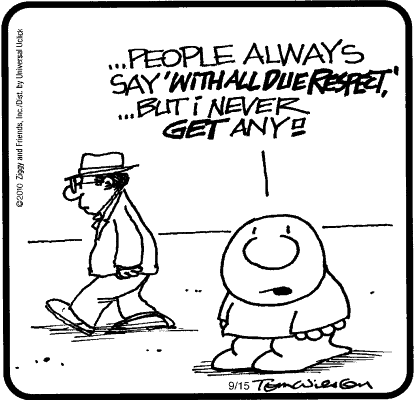 Ziggy staring forlornly at the viewer and admitting that nobody likes or respects him, using language that was vaguely funny when deployed by Rodney Dangerfield 25 years ago, is nothing out of the ordinary. But I admit that my interest is piqued by the sour-looking man in the hat strolling behind our hapless misery-gnome. Was it an encounter with this sneering Babbitt that left Ziggy so forlorn? Did the bourgeois conformist glare at our hero and sneer “Put some pants on, freak,” before stalking off? Perhaps Ziggy’s sense of persecution has some basis in external reality after all.

Shoe seems to have abandoned his attempt to woo an uptight lady bird with Farah Fawcett hair and moved on to someone more his style: a busty, heavy-lidded fellow drunkard wearing something low-cut who likes to complain about things. “Dogs, am I right? Seriously, who do we have to blow to get some God-damned booze around here?”

Oh, man, a whole year’s worth of boring and incomprehensible Gil Thorps is worth it if they’re necessary to frame the strip’s annual descent into fiery madness. This year’s ritual of cleansing flame features the newly elected co-captains placating the crazed torch-wielding mob by pledging to beat to death any Milford player who fails to adequately entertain the townsfolk.

“After all, the most important thing about my father is how he affected me, and since I cared about him less as a human being and more in terms of his failures to live up to some abstract ideal, once we made peace his continued presence in my life was frankly superfluous. His death was really more convenient than anything else. Am I right in assuming that this sensitive talk about my feelings is finishing the job of preparing you for sex with me that was started by the russet-colored meal I purchased for you and my orange suit/black shirt/wispy chest hair combo? I’ll bet I’m right! I’m a trained mental health practitioner!”