Three years ago Lu Ann’s sassy cousin Ruby arrived in New York with some bags that needed carrying, a coquettish smile, and a wildly age-inappropriate set of hair ribbons. Today we meet Tommie’s Aunt Iris, hauling in her own luggage and showing more personality in three panels than Tommie has in the last year and a half. Apartment 3-G’s long-term plan of replacing its core cast members with their older and dowdier yet spunkier relatives is proceeding apace. 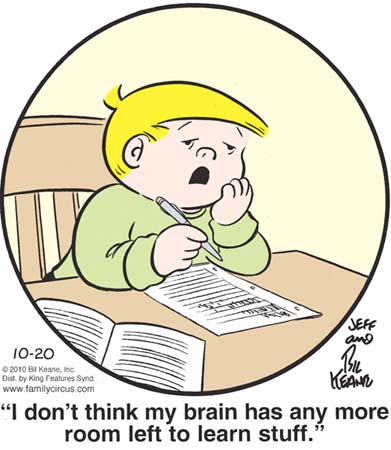 This is the second time this week we’ve been treated to the sad and hilarious sight of a Keane Kid’s brain shutting down as a defensive measure to prevent too much knowledge from seeping in. At least Billy’s mind has been overwhelmed by genuine book-learning, unlike Jeffy, whose feeble mind can’t even deal with basic cable.

Actually, Li’l Tater is presumably refusing to participate in cannibalism, based on a hilarious misunderstanding of the relationship between his name and the potatoes thrust before him. The confusion will eventually be cleared up, but this virtuous impulse will once again become a problem when he’s old enough to attend Hootin’ Holler’s most cherished annual ritual, the Fricasseein’ of the Revenooers.