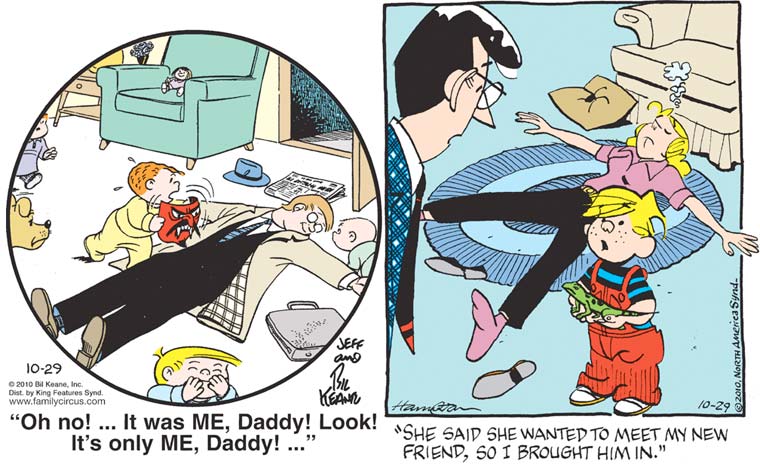 These two parents-on-the-floor panels were immediately adjacent to each other on my Chron page today, which allowed me to quickly come up with a game I like to call “Who’s the sociopath?” In the Family Circus it’s clearly Daddy, who’s sporting a sick little smile as he allows Jeffy’s utter terror and desperation to go on much longer than anyone should be comfortable with. (It should come as no surprise that budding sadist Billy can barely contain his glee at his brother’s panic.) Dennis, meanwhile, isn’t even deriving any joy from having literally knocked his mother out of her shoes and fused her brains into a molten lump. “Mommy isn’t moving anymore,” he tells his father, stone-faced. “Will we need to get a new mommy?”

It’s true: blanket-stealing is only perpetrated by honest heartland folks of the sort depicted in Pluggers. We coastal elitists don’t worry about it, because we sleep under mile-long blankets woven out of feathers stolen from the wings of angels.

IMPORTANT SOCIAL NETWORKING UPDATE! You might recall from Wednesday that Mayor Dalton’s prostate has its own Pacebook page. It now also has its own page on Facebook, a somewhat more popular social networking service. Feel free to “like” it, or whatever you kids do!